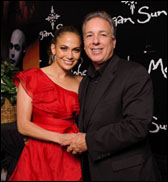 UNCASVILLE, CT (CelebrityAccess MediaWire) — After yet another year of top performing shows, the Mohegan Sun Arena has been ranked among the leading 50 arenas of any size in the world for 2011, according to numerous industry sources.

The rankings, which are based on concert ticket sales accumulated from arenas across three continents, place the Sun Arena squarely among the august ranks of venues such as London's O2 Arena, the O2 World in Berlin and The Staples Center At L.A. Live.

The accolade also marks Mohegan Sun Arena as the only casino venue in the world to be ranked among the top fifty arenas and third in the U.S. and fourth in the world among arenas of a comparable size.

The key event for the Mohegan Sun in 2011 however, was an exclusive concert by pop legend Jennifer Lopez. Despite not being out on a current tour, the sought-after Lopez and her team developed a custom, one-of-a-kind performance as a part of Mohegan Sun's 15th anniversary gala. The standing room only show garnered more than three weeks of national news coverage for the Sun.

"We are very fortunate to have both an All Star line-up and tech crew that is the reason for our reputation of being among an elite class of worldwide venues" " Tom Cantone told CelebrityAccess. – CelebrityAccess Staff Writers