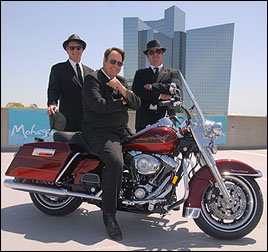 Included in the expansion is a major new HoB themed hotel featuring approximately 920 rooms, 261 of which will be themed House of Blues rooms. Guests staying in the House of Blues-themed rooms will be registered independently of other guests.

In addition to themed hotel rooms, the expansion will provide Mohegan Sun with a major new music venue, restaurant, retail outlet with House of Blues memorabilia, and special events room. Live Nation will own and operate a 1,500-capacity House of Blues music venue, joining three other extant venues at the casino, allowing them to accommodate anywhere from 300 to 10,000 guests.

When completed, the new expansion will add more than 1.4 million square feet to Mohegan Sun's existing structure and has a target opening date set for October of 2010. – CelebrityAccess Staff Writers