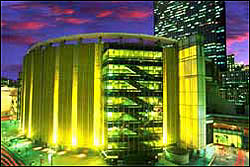 "Today's reorganization is a result of the thorough review process we have undertaken at Madison Square Garden over the past year, to ensure that all of its areas are operating efficiently and effectively," said James L. Dolan, president and chief executive officer, Cablevision Systems Corporation and chairman, Madison Square Garden. "We are confident that these new roles for Alan and Tim will help position the Garden and Radio City to achieve maximum operational results."

Gershowitz will oversee all aspects of Bookings and Productions at Radio City Music Hall, Madison Square Garden and The Theater at Madison Square Garden, including the Radio City Christmas Spectacular; Christmas Across America, scheduled for six cities in 2004, as well as all concerts, family and award shows. As part of the reorganization, Joel Peresman, executive vice president of the Bookings division of Radio City Entertainment, will now report to Gershowitz, who will also continue to oversee MSG's Human Resources department.

An 11-year Cablevision veteran, Gershowitz has held a variety of executive positions within the company. As Madison Square Garden's executive vice president, Facilities and Administration, he was responsible for the Facilities, Human Resources and Legal departments. Prior to his arrival at Madison Square Garden, he was senior vice president, Employee Relations for Cablevision, as well as vice president, Business Affairs at Rainbow Media, where he also held the position of senior counsel. While at Rainbow, part of his responsibilities included negotiating entertainment transactions for the company's various programming networks. Prior to joining Cablevision, he spent five years as a corporate attorney at Skadden, Arps, Slate, Meagher and Flom, after receiving his law degree summa cum laude from Brooklyn Law School.

Hassett joined Madison Square Garden in January, 2004, when he was named senior vice president and general manager, Madison Square Garden. Prior to his arrival at the Garden, he served as senior vice president and general manager of Giants Stadium and Continental Airlines Arena, where he was responsible for all aspects of venue and event operations and was landlord liaison to the Giants, Jets, MetroStars, Devils, Nets, Meadowlands Marketplace, event promoters, and all vendors. He also represented these facilities in contract negotiations, labor relations issues and other matters. Prior to his stint at Giants Stadium, he was a director of Stadium Operations for the New York Yankees. –Bob Grossweiner and Jane Cohen