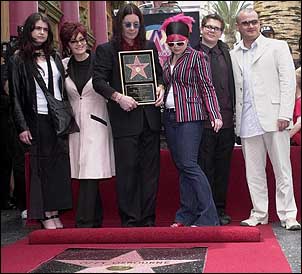 MTV: Music Television says that "The Osbournes" will return for a second season with 20 new episodes that will air in the US and on MTV's around the world. The show will once again follow the real-life drama of everyone's favorite rock-n-roll family, the Osbournes. Ozzy, Sharon, Jack, Kelly, the dogs, the cats, the assistants, the band, the roadies, the security guards, the neighbors, Melinda the nanny, and the rest will be back on MTV in the Fall to the delight of millions of fans around the world.

"We couldn't be happier to have the entire Osbourne family back for more episodes," said Van Toffler, President of MTV & MTV2. "We desperately love the show, we love the Osbournes, including all of their pets, and hope to bring the entire universe into their twisted unpredictable lives for many years to come."

"We are truly overwhelmed by the incredible response to the show," said Sharon Osbourne. "We never expected that by inviting MTV and the world into our home, we'd get such a positive reaction from fans young and old. It's been absolutely [bleep]ing amazing."