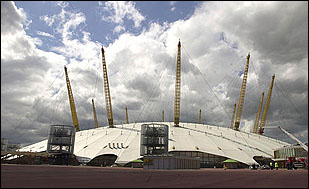 Anschutz Entertainment Group has been selected by the British government to develop and manage a 20,000 seat state-of-the-art arena inside London's Millennium Dome. AEG has committed a minimum of $200 million and will oversee the entire development within the Millennium Dome including Dome Waterfront, bordering the Arena within the Dome and approximately 15 additional acres along the Thames River. The arena is expected to fill a vital gap in London's venue market and become Europe's premier entertainment and sports facility. AEG

"AEG will create the finest 20,000 seat arena in Europe that will immediately become the home of the most prestigious world events," said Timothy J. Leiweke, president of AEG. "The successes we have achieved with STAPLES Center, our sponsorship and concert promotion companies as well as our real estate and development divisions make us uniquely qualified to create an entertainment, sports and leisure destination that will be second-to-none anywhere in the world. We look forward to working closely with the British government to together build our vision."

"With construction well underway on the 85-acre National Training Center in Carson, CA as well as the continued development of the LA Live entertainment district in downtown Los Angeles and the arena project in the heart of Berlin, AEG's global footprint continues to grow at a rapid rate," Leiweke added.

The new facility is expected to be completed in 24 months and will host a minimum of 150 events per year including music concerts, family entertainment and sports. Designed by architects HOK Sport + Venue + Event, the venue will be able to incorporate ice hockey, basketball, football, tennis, boxing, figure skating, gymnastics and volleyball. The sports schedule would include home matches of the London Knights Ice Hockey team. The arena under the Dome will also satisfy Olympic quality thresholds for certain events.

The immediate surrounding area will also be redeveloped and the Dome Waterfront will include a wide range of ancillary uses to complement the arena in the Dome including restaurants, bars and theatres that will benefit residents, worker and visitors.