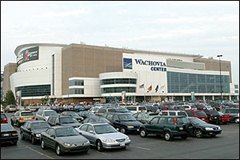 PHILADELPHIA (CelebrityAccess MediaWire) — Tim Murphy, a 25-year veteran of operating and managing multi-purpose sports and entertainment venues, was named as the new vice president and general manager of the Wachovia Center and Wachovia Spectrum.

Murphy will oversee all of the day-to-day operations, bookings and scheduling of the Wachovia Center and Wachovia Spectrum, two of the most active facilities in the United States. Additionally, he will continue to serve Global Spectrum as a regional vice president overseeing the Liacouras Center, Citizens Bank Park and the Everett Events Center.

"Tim is an incredibly talented leader with a vast amount of experience in operating public assembly facilities throughout the United States," said John Page, COO, Global Spectrum. "We are truly honored to have someone of Tim's stature taking the helm of the Wachovia Center."

Murphy replaces Page as the facilities' newest general manager; Page has expanded his role as the chief operating officer of Global Spectrum. The company now manages more than 60 facilities throughout the United States and Canada.

"As our company continues to grow nationally, it was necessary for us to bring Tim to the Wachovia Center and Spectrum to focus on the day-to-day operations of two of the country's busiest buildings," said Peter Luukko, president, Comcast-Spectacor, which owns the buildings. "As John Page's role changes and he takes on a more active role nationally with all of our facilities, we will rely heavily on Tim to keep the Wachovia Center and Wachovia Spectrum at the high level of performance that has been created for the two facilities."

Murphy is a former regional vice president for Spectacor Management Group, overseeing the operations of multiple venues throughout the United States, including the Pittsburgh Civic Arena, Three Rivers Stadium, Chicago's Soldier Field, the Richmond Coliseum and several European venues. Prior to joining Spectacor Management Group, Murphy was marketing and production manager at the Spectrum in Philadelphia, PA.

He also played professional soccer with both the Portland Timbers (NASL) and the Cleveland Force (MISL). –Bob Grossweiner and Jane Cohen