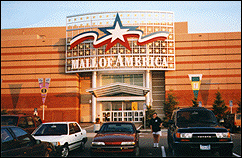 (CelebrityAccess MediaWire) — Officials at the Mall of America in Minneapolis, Minnesota, have announced plans to include a 6,000-seat performing arts center as part of a $1 billion expansion at the largest mall in the nation.

Mall officials told the Minneapolis Star-Tribune that they hope to break ground this fall and complete the development by the end of 2009.

The performing arts center will feature live orchestras and other acts. A 74,000-square-foot dinner theatre style restaurant will also be added to the mall. Along with the venues, the new expansion will include attractions such as four hotels, a new hockey rink, a water park and a cinema.

The mall directors are aiming their expansion project at attracting an older, more diverse crowd. Currently, the theme park and indoor aquarium are seen as attractions for children rather than adults. –by CelebrityAccess Staff Writers