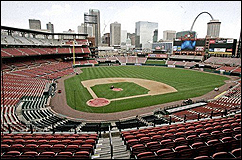 (CelebrityAccess MediaWire) — Many major league ballparks are starting to shrink their capacities, taking on a “less is more” strategy to create an urgency among fans for tickets and driving up demand. Officials have found that with this system, fans buy earlier and invest in season tickets, bringing out guaranteed money for the teams.

Many teams, such as the Boston Red Sox and the St. Louis Cardinals, have capped capacity, despite the Sox expanding the seating area, and the Cards building a new Busch Stadium. The Pittsburgh Pirates and the Philadelphia Phillies have sliced their seating capacity by 9,000 and 19,000 respectively. In New York, both the Mets and the Yankees are planning new parks with 16,000-fewer seats between them.

Since 1995, average seating capacity has fallen 11 percent, according to a report by the Boston Globe, while average per game attendance has jumped 22 percent. As tickets have gotten scarcer, ticket prices have more than doubled to an average of $22.21 this year.

The smaller ballparks offer better sightlines to the field and a more intimate setting, while also bringing in far more money for the teams. At the average park, ticket revenue per game has more than doubled over the last decade. –by CelebrityAccess Staff Writers