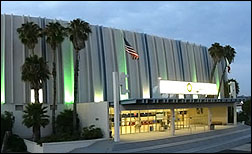 NATIONAL CITY (CelebrityAccess MediaWire) — After a failed bid to attract NFL Football's San Diego Chargers, some cities would just give up on their dreams of hosting a major sports arena that could host a professional sports team — but not National City.

Fresh from defeat with the Chargers, National City is keeping the dream alive. The San Diego Business Journal is reporting that the city is now considering the viability of building an arena that could host a basketball team and provide a new venue for major concerts. The new arena would replace the aging San Diego Sports Arena.

Mayor Ron Morrison told the Business Journal that negotiations with the Sports Arena Group, the current owners of the sports complex about building a new facility for 2 years now.

"The ipayOne Center (the Sports Arena’s former name) doesn’t have much of a life left, San Diego wants the property back, and with the arena’s size, it would be much easier to finance," Morrison said.

A new football stadium would have run around $800 million delivered while a basketball arena comes in at $250 million.

The most significant hurdle facing the development idea is luring a NBA franchise to the new arena. Two teams, The Clippers and The Rockets have already come and gone and minor league teams haven't fared any better. – CelebrityAccess Staff Writers