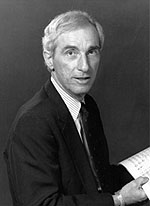 WASHINGTON (AP) — Michael Hammond, who became chairman of the National Endowment for the Arts just a week ago, has died at 69.

Hammond was found Tuesday at a home in Washington where he had been staying, NEA spokesman Mark Weinberg said. He had complained of feeling ill since the weekend, and his death was apparently of natural causes, Weinberg said.

A native of Kenosha, Wis., the conductor and composer was dean of the School of Music at Rice University in Houston when President Bush nominated him to lead the federal agency that decides grants for the arts. Hammond was confirmed by the Senate on Dec. 20, assumed the post Jan. 22 and was still in the process of moving to Washington.

"It is a tragic loss to our nation that his tenure has been cut so short," Weinberg said.

"Michael Hammond was an accomplished conductor, composer and advocate of the arts," Bush said in a statement. "His commitment to excellence and his extraordinary talents will be greatly missed."

Hammond's interests included music from Southeast Asia, the Renaissance and medieval times and the intersection between music and neuroscience.

He received an undergraduate degree from Lawrence University in Appleton, Wis., and a Rhodes scholarship to study philosophy, psychology and physiology at Oxford University in England. He also studied Indian philosophy and music at Delhi University in India.

In 1968, he left his post as director of the Wisconsin Conservatory of Music in Milwaukee to become the founding dean of music at the State University of New York at Purchase. He later served as president of the school, until he left for Rice's Shepherd School of Music in 1986.

He retained his interest in medicine, teaching neuroanatomy and physiology at Marquette Medical School and the University of Wisconsin. In 1999, he gave the keynote address to the International Conference on the Neuroscience of Music in Japan.

While at Rice, he designed a much-acclaimed new concert hall and directed a production of Stravinsky's opera "The Rake's Progress."

"The artistic community was eager and enthused about the prospect of a National Endowment under Michael Hammond's leadership and vision," Interlochen President Ed Downing said.

Hammond was still charting a course for the federal arts agency. But he had made it known that getting children interested in the arts and building a wider audience for the arts were among his priorities, Weinberg said.

"He was a remarkable man," Weinberg said. "He really wanted to make the arts a lively force in American life."

Hammond is survived by his wife, Anne, and a son, Thomas, who is a professional actor in New York.