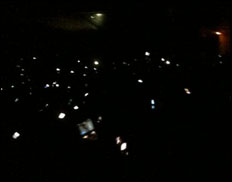 NEW YORK (Hypebot) – From musicians responding to fans' smartphone habits to a variety of studies regarding mobile devices and live shows, it's clear that mobile devices, especially smartphones, are becoming a bigger part of the live music experience. A new study from the Interactive Advertising Bureau and InMobi, a native ad exchange, gives an updated look at concert-goers use of mobile devices. Though it appears mobile use is high at all stages of events, its strongest current use is in the planning and information gathering stage.

The study is titled "Raising the Curtain on Mobile" and focuses on "Mobile’s Role in Researching and Purchasing Live Event Tickets."

"Mobile rivals TV as the preferred media channel for getting information on live performances (60% mobile vs. 53% TV)"

"22 percent “check in” at a live performance via social apps"

That's a large range of functions or jobs being accomplished through mobile devices though accomplishing all those things might end up involving an array of apps.

If you go to the presentation (p. 11) you'll see that mobile actually beats out all other media delivery systems for those seeking live event info.

In addition, "live entertainment seekers" who responded to the survey were as likely to have an event management app as a general movie app or a sports app (p. 12).

Overall it appears that use of mobile devices is more heavily weighted to the early stages of the process, especially those involving information gathering about who's performing or for planning trips.