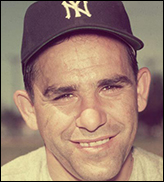 NEW YORK (CelebrityAccess) — Former New York Yankees All-Star catcher and team manager, famed for his baseball skill and for his humorous malapropisms, died on Tuesday at the age of 90.

"It is with heavy hearts that we share the news that Yogi Berra passed away Tuesday night at the age of 90," the ogi Berra Museum wrote in a statement.

Berra, who joined the New York Yankees organization in 1946 after serving with the U.S. Navy in World War II, played for the team for the lion's share of his career, from 1946 to 1963 and then spending his final year as a major league player with the New York Mets.

Berra is widely regarded as one of baseball's greatest catchers, and was selected to play in the annual All Star game for 15 straight seasons. He also played in 14 World Series, with 10 World Series championships to his name and holds numerous records for the championship series.

After he retired as a player, Berra served as a manager for both the Yankees and the Mets and then as a coach for both teams, as well as the Houston Astros.

Berra was also widely known for his Yogiisms, such as "90% of the game [of baseball] is half-mental" or "It's déjà vu all over again."

According to ABC News, Berra is survived by his three sons — Larry, a former minor-league catcher; Tim, a former NFL receiver; and Dale, a former major-league infielder – along with several grandchildren. Carmen, his wife of 65 years, died in 2014. – Staff Writers