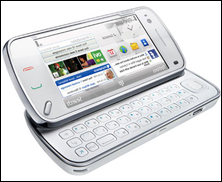 The announcements are part of Nokia's attempt to branch out into new markets, such as wireless online services.

"We are not on the defensive, we are on the offensive," Nokia executive vice president Anssi Vanjoki said at the two-day Nokia World event in Germany.

The Espoo, Finland-based company said it made a deal with Facebook, the wildly popular social networking site, that will let users of some its handsets update their location and status directly to the site through a Nokia Ovi account.

The feature will premiere on the new N97 mini phone that was also introduced Wednesday and will retail for euro450 ($644.13) without a contract when it starts shipping in October.

"People want to bring their physical and online worlds together via the Internet. The Nokia N97 mini is designed for this new social Internet and to help navigate people and places," said Jonas Guest, vice president of Nokia Nseries.

Nokia has been the top handset maker since 1998 but has gradually expanded to include online services, such as downloads of music, games, maps and the fast transfer of photos and video, especially as markets have become saturated.

It has estimated that the global online market will reach euro100 billion by 2010.

Nevertheless, Nokia unveiled new devices at its exhibition here, including more details about its new laptop, dubbed the Nokia Booklet 3G, which will ship in the fourth quarter of 2009 with Windows 7 and retail for euro575.

Made of aluminum, it sports a 10-inch (25-centimeter) screen and weighs 2.8 pounds (1.3 kilograms). That puts it squarely in the "netbook" category pioneered by Taiwanese manufacturers like AsusTek Computer Inc.

Unlike most netbooks, Nokia's Booklet will have a built-in GPS navigation chip coupled to Nokia's Ovi Maps software, and an aluminum cover in contrast to the usual plastic.

Nokia has previously tried to expand its portfolio beyond cell phones, making a "tablet" computer that runs non-Windows software. It hasn't been a mainstream success.

Nokia also unveiled a pair of new music phones, the X6 and X3.

The X3 is a more compact version that features direct access to Nokia's music store and features a built-in FM radio and 3.2 megapixel camera. It has a suggested retail price of euro115. Both devices are set to ship during the fourth quarter of 2009.