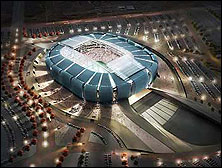 Global Spectrum has named Scott Norton director of Sales & Marketing of the new 64,000-seat Arizona Cardinals Stadium in Glendale, AZ scheduled to open in the fall of 2006.

Norton, who most recently was director of Sales and Marketing at the Rabobank Arena, Theater and Convention Center in Bakersfield, CA, since February of 1998. In his new role, he will work closely with Cardinals Stadium General Manager Peter Sullivan on the day-to-day marketing of the facility, including pre-opening and marketing of events once the facility is opened. Additionally, he will be responsible for hiring the marketing staff and selling sponsorship, hospitality, and special event packages.

"Scott brings our company a tremendous amount of experience in marketing major entertainment events and the opening of a new facility," said Sullivan. "With Scott's marketing and event sponsorship experience, he will help us secure and successfully produce additional non-football events for AZSTA, making Cardinals Stadium truly a spectacular multi-purpose facility."

Norton, who during his 14-year career in the sports and entertainment industry, opened a new facility in Bakersfield, CA, and has successfully marketed and produced hundreds of concerts, sports and family show events. A graduate of the University of Connecticut in 1989, he began his career in the industry as a sales representative for the Hartford Whalers National Hockey League team in 1991. He then served as sales manager at the Hartford Civic Center prior to moving to California to open the Bakersfield Centennial Garden, now Rabobank Arena, in 1998. –Jane Cohen and Bob Grossweiner