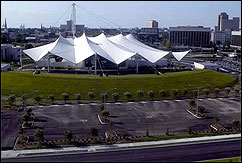 (CelebrityAccess MediaWire) — Representatives from nearly a dozen companies came to inspect the nTelos Pavilion at Harbor Center recently to learn more about the amphitheater and to decide if they could be the ones to make the venue successful.

The Portsmouth, Virginia, shed has endured five rocky seasons to date, during which it suffered a hurricane ripping the theater’s roof, a broken operating contract and bitter disputes with the current management company.

Portsmouth is soliciting bids from several major companies with experience in the field through September 2nd, according to The Virginian-Pilot.

“It is the city’s goal with this new contract to make this facility a sustainable operation in the future,” city spokesman Kenneth Wheeler told the paper. “What we’re looking for here is a lot of creativity.”

Harbor Center Joint Venture, the company that has managed the facility since its opening in 2001 is allowed to bid on a new contract as well.

Consultant Bill Luther, who has been hired by Portsmouth to oversee the amphitheater and the process of hiring a new manager, said he’d been contacted by many firms interested in the work, despite its troubles in the past.

“It has a good reputation,” he told the paper. “The facility has recovered real well this year. Now we’re just looking for the best proposal.” –by CelebrityAccess Staff Writers