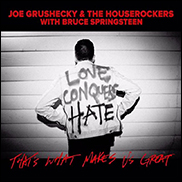 You've got to buy it to hear it.

The buzz started last night, I was getting e-mail, how Joe Grushecky and Bruce Springsteen had collaborated on a new protest song, entitled "That's What Makes Us Great." There were even lyrics!

So I woke up this morning ready to click to hear…

And I found news stories all over the web, directing you to Grushecky's site, in order to purchase a download.

A download? What, is Grushecky living in 2003? The iTunes Store is dying, streaming is rescuing the music business, just check the RIAA statistics all you on demand haters out there, and Grushecky is keeping his music behind a paywall?

For the uninitiated, Joe Grushecky is a Pittsburgh lifer who put out a highly-hyped album with his band the Iron City Houserockers entitled "Have A Good Time but Get Out Alive!" back in 1980. I bought it. Joe's voice could have been better, as could have the
songs, but there was an undeniable energy contained, I've paid attention to Joe ever since, who continued to play music while teaching school, collaborating with blue collar rocker Springsteen now and again.

Publicity only lasts a moment in today's world. What happened this morning is old news by tonight. If the light shines upon you, you must be ready to deliver, your product must be available.

And the enemy is not piracy, but obscurity. It's hard for household names to get traction, to get heard. No one's got any time. So you hope that the stars align and people will check out your tune.

Yes, one tune, that's all we can handle. If we like that, we'll dig deeper, for more. Which is why you must have a plethora of material on streaming services, on YouTube, so those interested can learn more, but don't squander your opportunity in the marketplace by putting out an album, which comes out once with publicity in a short window which then evaporates unless your sole goal is to get it up on streaming services so people can check it out sometime in the future.

As for YouTube, you must put all new songs there immediately. You want to cover all bases. Forget those talking about the "value gap." First and foremost, listens on music-only streaming services are now eclipsing those on YouTube, if you're fighting YouTube you're probably still fighting Napster and KaZaA. Furthermore, some people will never pay, at least not at first, give them a chance to sample your wares.

And monitor your social media feeds. I tweeted Grushecky all of the above and what did I hear…

When you're in sell/promotion mode, you, or someone on your team if you're a big shot, should be reading and responding to all comers. People expect this today, everybody's important, we're all on the same level, ENGAGE!

I've got no idea whether "That's What Makes Us Great" is bad or good. But one thing's for sure, today I wanted to hear it. Tomorrow?

Almost definitely not, unless the buzz is deafening, which is doubtful, since most people will not pay and the media will be on to something else.

Feel lucky if someone wants to check out your art. There are many avenues of exploitation/income if people listen and care. Don't be stuck in the last century, expecting people to pay before they listen, worried about piracy, yelling at the new distribution models like Grandpa Simpson. Harness the tools, don't decry them!