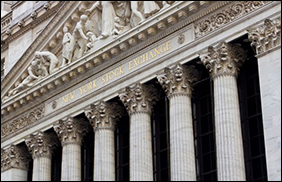 Disney cut ties with PewDiePie. Fox News is about to dismiss Bill O'Reilly. Weren't they supposed to be able to harness the power of the internet to supersede their corporate overlords?

The internet is controlled by a small cabal of companies. You can utilize their tools to get ahead, but only if you play by their rules, which they might change at any time. But without the corporate behemoths on your side, you're positively moribund.

Of course there are exceptions, like Chance the Rapper, then again, he got 500k for a two week exclusive at Apple.

So let's drill down. We've been hearing for six months that fake news is rampant and the press is impotent. Yet the "Wall Street Journal" took down PewDiePie and the "New York Times" tackled Bill 0'Reilly. Just because Hillary lost that does not mean the mainstream media always gets it wrong. Furthermore, the recently published book "Shattered" delineates how Hillary herself decimated her campaign, maybe it wasn't just that the takedowns in the media were ignored.

So Bill O'Reilly is making beaucoup bucks for Fox. Only problem is he's a serial harasser. Sexual harassment, anti-Semitism, these are third rail behaviors that cannot be outrun in corporate America. Advertisers flee. No Fortune 500 company wants to be the new United Airlines. Customers start agitating and companies pull sponsorship and the purveyor pulls the plug. Money only goes so far when you're a public company. They love their profits, but they can be shamed into doing the right thing. Kinda like that company that raised the price of EpiPens…

You see if the light is shined upon bad behavior, if you're in the media crosshairs, you're doomed, just ask Theranos. And Theranos was brought down by the WSJ, it's not only the NYT that can decimate your career. And sure, a news item can get started on a blog, most of which are now monetized, the boy in his basement pontificating and having impact is passe, but it's only when the big boys glom on that there are consequences.

It wasn't supposed to be this way. The internet was supposed to level the playing field, give us all a chance.

But you can't get on Top Forty radio if you're not signed to a major label, or aligned with one, that's right, gain any traction and the major will come up with an offer. You can't go it alone. Everybody online keeps telling you you can, but that's an empty echo chamber.

So the internet is run by four companies, Apple, Google, Amazon and Facebook. Go into competition with them and they'll imitate you, are you seeing what Instagram is doing with Snapchat? And Instagram is an interesting story, it was sold to Facebook. Now the goal is to sell out to one of the big four, and they'll threaten you if you won't. Amazon went to war with Diapers.com, which they bought and recently shut down, and Amazon gave an ultimatum to Zappos, saying it would go into competition with the shoe company, and Zappos made a deal with the retail behemoth too.

So Glenn Beck gets canned and goes independent and has almost no impact, he's no longer part of the national discussion.

Bill O'Reilly loses his perch and…

No one else will hire him. Hell, even Dan Rather couldn't get another big gig with a much less heinous faux pas. Will Bill's books continue to top the best seller list? Will he lecture to his minions and be heard?

On a fraction of the level he is now, because he's losing his microphone.

The rich are getting richer and the poor are irrelevant and there is no middle class. Meanwhile, you keep thinking you have a chance when you don't, the game is rigged.

You're sitting at home making music on Pro Tools. Putting it out on Spotify via CD Baby, spamming everyone you know via social media and ending up nowhere. You just can't get heard, you need to be aligned with one of the big boys to do that.

And if you're building your own business via YouTube advertising you might get killed when the video giant changes its algorithm. David Pakman used to survive on YouTube ad payments, now he's on Patreon begging for donorship. As for Patreon, it's where niche players go to survive. Not bad if you can make a living, but you've got no social impact, no footprint, you're a footnote.

For the past fifteen years we've seen internet phenomena which give the sole proprietor/artist hope. There was Radiohead with "In Rainbows," Amanda Palmer on Kickstarter, PSY on YouTube, but none of them were replicable, they ended up stunts, footnotes in internet history.

So what we've learned here is you live and die by the sword of the big boys. And you can even vote for the renegade, but he'll turn his back on you when he gets in office.

And nobody is bigger than the institution.

And the institution can fathom no hits to its reputation. Roger Ailes had to go. When star Megyn Kelly leaves because of sexual harassment, Fox wakes up and realizes it must protect itself, comes to the conclusion that Bloviating Bill is expendable.

And without the imprimatur of the major, O'Reilly is toast. Just like Trent Reznor and Nine Inch Nails, which left oppressor Interscope to ultimately sign with Sony after testing the independent waters.

Everything we were told was wrong. That the internet would topple the old, slow, ignorant players.

No, they just became more powerful.