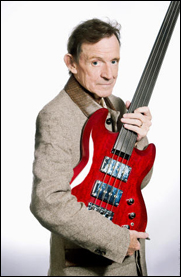 And we always thought Ginger Baker would die first.


Clapton might be God, but there was no Cream without Jack Bruce. He was the one who sang most of the songs. If he'd found his Delaney Bramlett maybe he too would be a household name instead of a footnote.


That's right, Eric had his instincts, but it was Delaney who got him to stand out front and sing. Jack was born with this power.


And although he cut "Songs For A Tailor" and did the indelible "Theme For An Imaginary Western" times were changing so fast, Jack moved so slowly, that all the hopes and dreams we had in him were transferred to others.


But we remember the records.


Hipsters had "Fresh Cream." They knew John Mayall and his Bluesbreakers. The cognoscenti picked up on "Disraeli Gears." And then everybody went along for the victory lap on "Goodbye." And during the "Wheels Of Fire" era, Cream was the biggest band in the land.


That's right, not Taylor Swift, needing an executive producer to impart direction and cowrite the songs. We were casting aside the Svengalis, songwriters like Max Martin were struggling. As for Katy Perry and her comic book outfits, at this point musicians wore their street clothes on stage and barely moved, if they looked at the audience at all. Image was nearly irrelevant, it was all about the music.


As for "Sunshine Of Your Love," the riff was written by Jack.


That's right, one of the famous in rock and roll history, up there with "Smoke On The Water." And sure, Eric executed the solo, but Jack sang the words. It bubbled up from nowhere, actually, the first side of "Disraeli Gears," and then it got played on nascent FM underground radio and then it unexpectedly exploded on to AM radio in the summer of '68 and the whole world was revolutionized. Yes, the world changed when "Sunshine Of Your Love" and "Purple Haze" became ubiquitous. "Sunshine Of Your Love" was the "Royals" of its day, but with more impact and made by people who'd been there and done that, who had a wealth of experience in their souls.


Come on, it's in your DNA! Your head is nodding like a beatnik, you can't wait for the whole band to come in, you too want to feel FREE!


And that's what our music did back then. It did not make us part of one big happy family tied in with corporations and featured on the "Today," show, no it was just for us, individuals and the few like-minded people you could find, which was a group that keep growing and growing until the whole world realized its size at "Woodstock."


Cream had a wealth of hits, you didn't buy the albums for the singles, or if you did you were enraptured by what you discovered.


And so many were originals, but there were reworkings of blues numbers like "I'm So Glad," another Jack Bruce vocal.


That's right, Jack wasn't a sideman, he was the FRONTMAN!


The great migration has begun. From terra firma to the sky. Our heroes are starting to go. They're fading away. For every eternally youthful legend like Paul McCartney, there's a plethora of doddering oldsters who once tore it up around the world and are now rickety and ready to go.


And the truth is, most of this material is not going to be remembered by later generations. But we're never going to forget it. We grew up to it. It's the elixir in our lives. That's right, classic rock built the modern music business, everything from radio to arena shows and we still go, because we still need the hit.


So, so long Jack Bruce, on one hand you were born too young, before the Internet era, before everybody could know every detail of your life and hold you close to their bosom. That's right, we know very little about Jack Bruce, just a few details, his music speaks for him, and ultimately that's grand.


And so long album radio, where the deejay didn't want to be your friend so much as he wanted to demonstrate how hip he was by playing tracks that stretched boundaries and elated you.


And so long albums themselves, when you didn't need a hit to succeed, but they were so expensive that if you bought one you played it incessantly and knew it by heart.


And so long the dream that every band will reunite and come to your city and you can relive your youth.


That's right, Cream unexpectedly reunited. Played London and New York. But that was it. If you want to see someone, see them now. Chances are so many you'll never get to see. Not only because of discord, but because members are dead.


Who would have thought that could happen?