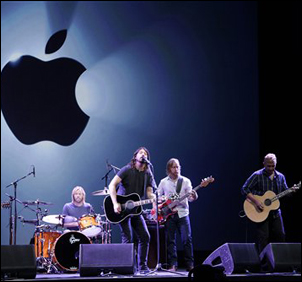 
It went on too long, they showed Al Gore too much, Foo Fighters overstayed their welcome in a venue in which they were far from appropriate.


But Apple knocked it out of the park.


You see it's a band. Kind of like Van Halen or Genesis. Wherein the indispensable frontman departs, yet the act soldiers on to even greater commercial heights.


Let's start with Eddie Van Halen. What is he known for? His fashion sense? His commercial endorsements? His love life? No, Eddie Van Halen is known for his guitar-playing! What a concept.


Yup, that's one thing that's wrong with the music business.


Oh, there's a lot of lip service paid to the sound. But the real story is everyone involved, from player to manager to label head, is looking to tie in with the Fortune 500 and TV in order to get ever richer. Music is just a means, it's no longer the end.


And the public knows.


Watch this video. What will strike you is there are no ties. Nobody putting on a faux front. Just like with the music of yore, it's what's inside that counts. What's inside your brain. Whereas music has become about the trappings, not only clothing but fragrances. All sold by hucksters. Yup, music is the land of Barnum, tech is a haven of substance.


This is the way it used to be in music. From Clapton to the Allman Brothers, you wore the same clothes on stage as off. Because it was the music that mattered.


Like a great band, Apple was formed at a very young age. And like a truly great band, the players are not interchangeable, they grow, we come to know them. Careers? Those are history in the music business. Hell, if you had a career would you be a judge on a TV show? Just ask Christina Aguilera, her last album was toast. As for Jennifer Lopez scoring a hit single after appearing on "Idol," I must use that classic entertainment refrain…what have you done for us lately?


Because there's nothing there.


A great band has a string of past hits, but continues to create new ones. If you're not impressed with the iPhone 5, its display and manufacture, never mind features, you're a PC lover who refuses to get on the Apple bandwagon. Yes, there were people who hated the Beatles too. Did they win? Of course not!


And it's all lorded over by Tim Cook. Who's growing into the role. He's no longer stiff, he's comfortable in his skin…well, at least until he endlessly introduced Foo Fighters. Hell, you'd have expected John Lennon to appear, back from the dead.


And although he refuses to publicly come out of the closet, Tim Cook is gay. Do you see Rush Limbaugh protesting Apple? No, he embraces the company. Because you just cannot pooh-pooh greatness, you're drawn to it.


You see Apple has a culture. Where it's all about excellence and there's no shame in being commercial. Yup, that's true success, when you can sustain a high level of artistry and still reach a ton of people. Maybe if no one's paying attention you're doing it wrong?


I'm a little flummoxed that Apple used to be a leader and is now a follower in music. Streaming is the future. Apple could bring us there. Maybe, like with CD burners and jukebox software, they'll be late to the party and reinvent the paradigm, but it's a shame that they show no social responsibility in this area. Then again, you need rights and the rightsholders heinously require a pound of flesh to innovate…which is one of the reasons why music is a second class citizen once again.


Watch the gaming demos. I never game, but when I saw the rearview mirrors were live in the EA racing app, I was stunned. The same way I was when I first heard "You Can't Always Get What You Want" or "Gimmie Shelter." So rarely does music stun anymore. It's created by low level provocateurs who barely have any pubic hair who are here today and gone tomorrow. Hell, you can trumpet Justin Bieber's financial success, but is there anybody in the world giving him credit for doing great musical work, for pushing the envelope, for wowing us?


The cycle is complete. Tech is the new rock and roll. And it got there by putting in a hell of a lot of hard work when no one was listening or watching, all in the service of excellence, all for you, the customer.


That's how far we've come. To the point where most kids believe a musical act is something developed on TV created by old men which is only good for bumping your ass on the dance floor.


Hm… Think about that.