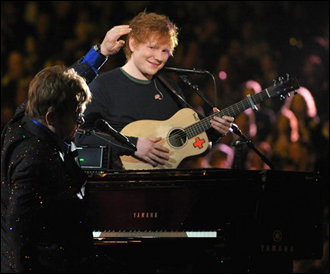 Did you catch LL Cool J imploring viewers to tweet, to participate?

Once upon a time the music industry was clueless as to tech. It specialized in following as opposed to leading. Even more, it tried to keep people in the past, fruitlessly, even suing to try and maintain an old paradigm.

But now even grandmothers have iPhones. We’re all on the bleeding edge. We all know about Instagram and Pinterest and soon everyone will know about Snapchat. Interestingly, very few people could name everyone who appeared on last night’s telecast. Because in a world of choice, only institutions maintain. Used to be musicians were institutions, look to the Beatles, U2, even Jay-Z! But now, the only thing used by everybody is a computer. So if you think you’re gonna reach everybody with your music, you’re delusional. Sure, try and grow your niche, but be wary of softening the edges, losing your essence. Kind of like Taylor Swift. She used to be a country superstar, revealing her truth in a time-honored way. Now she’s a star, a vehicle specializing in being a tattle-tale. How much momentum is there in that paradigm? We’re gonna see!

The fun is in participating. Commenting. Connecting with friends.

But Les Moonves is so interested in his bottom line, he refuses to air the Grammys at the same time in every time zone.

Music gets no respect! The Oscars aren’t on tape delay!

Today it’s all about live. Just ask Mark Cuban… And he’s got more money than Les Moonves, than so many of the media titans. Mark’s got that one right. We want to bring everybody together. It’s sports, it’s music, it’s events.

And CBS refuses to realize the Grammys are now an event.

Would you watch the Super Bowl on time delay?

CBS refuses to prepare for the future. Sure, advertising dollars might dip at first if the Grammys are simulcast everywhere, but soon they’d go up, just like for the aforementioned Super Bowl!

What was I supposed to do? Not read the tweets from my east coast brethren while I watched in a later time zone? Miss out on all the snark and fighting? Are you kidding, that’s better than the show! Only LL Cool J and the TV actors reading from the Teleprompter weren’t in on the joke. That’s the fun! Feeling superior to the sell-outs on TV! Who’ll do anything for exposure, anything in pursuit of their goal, not realizing the audience, their true bread and butter, will have none of it.

It’s all about being a member of the group. And CBS denied our ability to be so.

You want to appear early. And you want to play live, preferably acoustic. Ed was last night’s big winner. It’s not about the awards, are you kidding me? It’s about the appearances!

Tone deaf. In an era where Mumford & Sons and the Lumineers are the new “It Boys,” playing acoustic instruments, only dancing if they’re truly inspired, Taylor fronted a train-wreck so out of touch with today’s ethos it was beyond laughable, it was akin to “Springtime For Hitler.” That little girl act, where she gets to live out her fantasies… She’s too old for that. But I do give Taylor credit for being more into the show than any attendee. She was grooving to so many of the performances, she’s a fan.

Love you Elton, but why do you get three appearances? Two performing, one with Juanes singing “Your Song.” Talk about overkill…

Meanwhile, you should have heard Juanes sing the into to Bruce Springsteen’s “Hungry Heart” in Spanish Friday night. It was magical. But even though he’s the token Latino performing on the show, they won’t let Juanes sing in his native language. Hell, I saw Shakira at the initial Latin Grammys and I didn’t understand a word, but I got it. Hell, isn’t music the universal language?

That music doesn’t work on TV. Anybody playing loud should know this. Coming out of the speakers of flat panels, which are notoriously lousy, rock music becomes a parody of itself. But no one can turn down the promotional opportunity.

Takes balls to appear on national television when you’re not anorexic. You go girl!

I wish there were no Mariah Carey. Then everybody who followed her wouldn’t find it necessary to oversing. On one hand, Kelly’s performance of Carole King’s “(You Make Me Feel Like) A Natural Woman” was subtle and magnificent, but then she went all Ethel Merman on us and ruined it.

Looked small. He doesn’t have a spectacular voice. His new material was far from phenomenal. He would have been better off not appearing. It smacked of a promotional appearance, and yes, the audience can smell it. Meanwhile, enough with the introductory hosannas. He was in a boy band, he’s not Paul McCartney!

If everybody gets one, they lose their meaning.

Oh yeah, you want to put it on your resume, in your marketing materials, that you’re a Grammy winner. But it’s kind of like getting a trophy for participating in soccer. Hell, Jon Stewart’s got two Grammys, and he can’t sing or play a lick!

Make less of them.

Forget the rank and file, all the money comes from the TV show anyway.

If you tell me you’ve won a Grammy, I’m not impressed.

Because too many people get them and I don’t trust the people voting.

The critics’ darling. His performance was pretty good, but isn’t it funny that the media and the industry don’t stop saying how great he is yet the public has yet to buy? Maybe they ultimately will, but I still can’t get over revealing his love of a man to sell an album. What’s next, revealing your zadie was gassed at Auschwitz so people will buy your book, movie or record? Have some dignity.

I know I said the awards are meaningless, but I liked that the voters got this one right. This song broke on the Internet, was powered by YouTube, radio was last, but it was a slow burn that affected us all…and I don’t even like it!

Was robbed. She had the song of the year.

Then again, people will be singing “Call Me Maybe” forever, for as long as they’re alive, it will remind them of the summer of 2012. That’s the power of music, it’s a marker, it defines us.

She may never have another, but don’t argue with a hit.

“Call Me Maybe” is a stone cold smash.

How do I know?

Everybody knows it. And that’s almost impossible these days.

Good, bad or otherwise, the Grammy organization deserves huge kudos for remaking their show, changing the focus from the awards to the performances. Oscar ratings keep tanking because the old guard is inured to the past, whereas the Grammys threw out the bathwater, got hip and are positively now. If you don’t think last night’s show was a reflection of reality, you live in a trailer without Internet access on the fringe of the prairie.

It’s about putting on a show.

And to see everybody grovel for airtime is to…get you tweeting at home, laughing at them.

Do you have the balls to not be on the Grammy telecast?

Because music is personal, and this show is anything but.

Music is listened to alone, it saves lives, and if you watched last night’s show, you’d never know this. You’d see people dressing up, you’d think music was tied to fashion. You’d see people preening for the camera. You’d see people act like they’re better than you. But nowhere was there evidence of music’s true power.

Music also brings us together. That’s the power of electronic music.

But last night was truly about winners and losers. I’m up here, and you’re not. Which is no way to be a success in today’s era.

It’s not your grandfather’s Grammys…

You may not like who won, you may not like any of the acts, but thank god Steely Dan didn’t win for an album that looked good on paper but barely sold and was eclipsed by so many other productions.

Remember having to listen to all that crap how Dylan’s album was one of the best of the year, that it was gonna win a Grammy?

IT WASN’T EVEN NOMINATED!

Just because you say it’s so, that doesn’t mean it is.

Oldsters need to recalculate. You may own the press, but you don’t own the hearts and minds of the public. I’ve got no idea how the Grammys revolutionized, how they got hip and young, whether it was by accident or was planned, but by gosh, it happened, and we’re all better off for it. Because finally we’re living in the present. No one bitched about piracy. No one got nostalgic about CDs. It was positively staggering that an organization and a telecast that have been out of date since their inception no longer are.

Not that the show was any good, but I needed to watch it, so I could tell you what I thought, so you could bitch back at me, so we could all be in it together as opposed to living in our own cubby holes.

Yup, the Grammys suddenly have presence and power. They’re finally what everybody said they were.

You know music’s greatest night. When that record prevented you from committing suicide. When you first had sex with that song playing in the background. When you were at the club or the arena, arms in the air, exulting in the joy of what was coming from the stage, believing there’s no place you’d rather be.

Despite the puffing of shirts, the major labels have never had so little power, and whatever power they do have is dissipating. The action is on the road, on the website du jour, where people pass on what’s interesting to them, frequently sans hype.

The audience is in charge.

And that’s why we all need to tweet in real time. To exult in our power.

Yes, we rule the music business. You, me and everybody who tunes in the execrable Pandora or makes their own playlists on Spotify. The center cannot hold. The Grammys are about the center. But really, it’s about the edges. It’s about coming from the outside in. Ergo, the success of the Lumineers, who broke the color barrier at radio, proving you didn’t need beats to be on Top Forty.

We’re all in it together.

I don’t know where it’s going.

But it’s a blast to be on the ride.