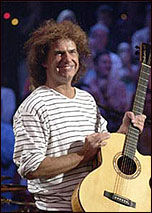 (CelebrityAccess News Service) — Guitarist Pat Metheny, fresh off of his 15th Grammy win, has made this a year of international outreach to musicians around the world.

Says Metheny " I have been so lucky to be able to travel around the world extensively for most of my life as a musician, and over the years I have been able to hear and meet many musicians who are well known in their own countries, but may not be that well known abroad who are playing music at incredibly high levels. I wanted to take some time at some point to develop some of the musical relationships that I have made through my travels and start some new ones with some of the musicians around the world that I really admire."

This international year began for Metheny with a most unusual collaboration in Poland with jazz/folk singer Anna Maria Jopek and a hand picked ensemble of the best young Polish musicians. Metheny and Jopek released a recording called "Upojenie" that has become not only a critically acclaimed masterpiece but one of the best selling jazz records of all-time for Poland selling over 100,000 copies in Poland in just the few months since it’s release. Metheny comments, "Poland has always been a special place for me since going there for the first time in 1985. It is filled with special musicians and audiences who are among the most soulful in the world".

Metheny’s summer will be filled with a hectic lineup of important residencies around Europe at five of the most prestigious jazz festivals on the continent. Metheny has been invited to be "Artist-in-Residence" by; the North Sea Jazz Festival in The Hague, Netherlands, the Vienne Jazz Festival in Vienne, France; The Ravenna Jazz Days in Ravenna, Italy, the Vitoria Jazz Festival in Vitoria, Spain; and Jazz Baltica in Kiel, Germany.

During those five festivals which span across the first 3 weeks in July, Metheny will play with over 100 of the most innovative musicians of our time, including the Esbjorn Svensson Trio, Enrico Rava Quartet, Kepa Junkera and Txalaparta, Han Bennick, Andy Sheppard, Daniel Humair, The French National Jazz Orchestra, The Metropole Orchestra of Holland, Carlos Benavent, Jesse Van Ruller, Mike Brecker, Christian McBride, Rita Marcotulli, Till Bronner and many, many others.

Says Metheny, "The only request I made of these festivals is that I could play mostly with musicians from the home country of the festival. There are so many great musicians in each place, and I have noticed that often they are somewhat overlooked in situations like this in favor of more "name" international players. There are great players everywhere."

The repertoire for these concerts will include pieces that the various musicians have picked from the Metheny songbook as well as contributions from the other composers involved.

Metheny will also be conducting workshops at several of the festivals under the auspices of the IAJE. (International Association of Jazz Educators).

Metheny’s year will continue in September with an extensive tour in Norway with the Trondheim Jazz Orchestra playing arrangements of Metheny compositions by the innovative Norwegian arranger Erlend Skommsvoll. This association began at the 2001 Molde (Norway) Jazz Festival, one of Metheny’s previous residencies. Comments Metheny "Molde was the first time I ever participated in something like that and I learned so much from the experience. The musicians that have come out of the Trondheim school have been working hard to develop a very personal and unique dialect of their own within the jazz language. For me, this kind of effort represents the future of jazz and it is exciting for me to get to participate in activities like this."

Metheny has also recently released a solo Baritone guitar record called "One Quiet Night" which debuted on the Billboard Jazz Charts at #1. Hear the new music of "One Quiet Night" at http://onequietnight.patmethenygroup.com/home.shtml Liner notes and album credits can also be found at that location.

Pat is also in the process of preparing the next Pat Metheny Group record for release in 2004. Metheny will also be playing concerts in the USA with his new trio featuring bassist Christian McBride and drummer Antonio Sanchez in the fall of 2003.