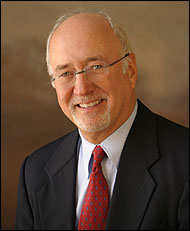 (CelebrityAccess News Service) — Paul Heid of Heid's Music in Appleton, WI became the 72nd chairman of NAMM, after the summer session of the interntional music products association ended. No stranger to NAMM, Heid served a term on the NAMM board of directors and the last six years on the NAMM executive committee contributing to all of the association’s activities including Sesame Street Music Works, SupportMusic.com and the successful transition of NAMM’s president/CEO position.

“This is a very exciting time for the music industry,” said Heid. “The number of people who play musical instruments has grown almost 25 percent since 1985, with more than 1 out of every 2 households in the U.S. today having family members who play a musical instrument. I am thrilled and deeply honored to have this opportunity to serve in this new role as chairman as we seek to fulfill NAMM’s mission of strengthening and unifying the music products industry and creating more music makers.”

“The NAMM staff and I look forward to the energy, passion and wisdom Paul will bring to the chairman position as our industry works toward the goal of long-term, sustainable growth,” said Joe Lamond, president and CEO, NAMM.

Heid follows the successful chairmanship of Steve West of West’s Music in Coralville, IA, and joins a list of distinguished industry leaders who have served in this prestigious post over the past 102 years.

Also elected with Heid were vice chairman Dennis Houlihan, president of Roland US; treasurer Chip Averwater of Amro Music; and secretary Tom Schmitt of Schmitt Music Company, who join Joe Lamond, president and CEO of NAMM on the Executive Committee.