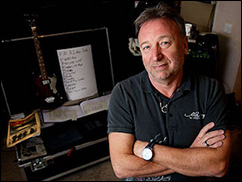 (VIP NEWS) — Former New Order bassist Peter Hook is suing his ex-bandmates for millions of pounds in a bitter row over royalties.


Hook claims he has lost out on more than £2.3m since the three other band members set up a company without him to handle the band`s income in 2011.


Hook has accused Bernard Sumner and Stephen and Gillian Morris of "pillaging" the pop group`s assets.


The trio say they have treated Hook fairly and that the guitarist`s stake of the royalties is reasonable.


At a High Court hearing, Judge David Cooke ruled that Hook was not acting out of "spite" and cleared the way for him to take his complaints to a full trial.


The legendary Manchester band, formed by the surviving members of Joy Division in 1980, are known for hits like Blue Monday, True Faith and Regret.


When their record label Factory collapsed in 1992, the foursome formed a company named Vitalturn to hold all of New Order`s rights.


Hook parted company with the band in 2007, but the other members carried on without him and continued to use the New Order name.


They granted the new company worldwide exclusive rights to the New Order name and the related sources of income for 10 years.


Hook`s barrister Mark Wyeth QC said the "clandestine, premeditated and deliberate" move had cost the bassist £2.3m by October last year and his losses were continuing.


Mr. Wyeth said: "It was as though George Harrison and Ringo Starr had got together at George`s house one Friday night and had acted together to divest Paul McCartney of his shareholding in the Beatles, and didn`t tell Yoko about it either."


In a statement, the remaining members of New Order said they were "disappointed that Peter is pursuing this claim in this particular way".


They said the bassist still received his "full share" of income from the band`s back catalogue, adding: "This dispute relates only to the share of income he takes from our work without him since 2011."


Hook receives 1.25% of the band`s royalties and other income from merchandising and performances. But he wants up to 12.5%.


Mr. Wyeth said the dispute was "not about musical direction or musical differences or personality clashes, but first and foremost about wrongdoers taking control of a company and stripping it of its property".


However, David Casement QC, for the other band members, said they had acted in an "entirely reasonable" way and said Hook`s complaints were "completely misconceived".


The bassist was either intent on "obstructing" the trio from continuing their success as New Order or wanted to "rejoin the band", he told the court.


The remaining band members say Hook left the band, and Mr. Casement told the court the musician had decided "because of his non-inclusion to bring this claim in order to leverage some advantage from Mr. Sumner and the rest of the band".


New Order`s latest album Music Complete was released in September and reached number two in the UK – making it their highest-charting album since 1993.


Judge Cooke rejected the notion that Hook`s "true motive was to get back into the band or spite the defendants, who are pursuing their careers successfully with the use of the name when he is not able to participate".


Since leaving New Order, Hook has toured with a new band under the name Peter Hook and the Light.