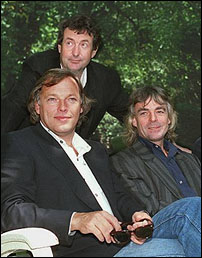 According to Reuters, Pink Floyd fans hoping for a reunion of the veteran rock band may be waiting in vain, the group's leader David Gilmour has indicated.

Pink Floyd, which has not performed together since 1994, remains on hiatus while its members pursue various projects. Gilmour is preparing to release a concert video in November, and hopes to record a solo album next year.

"Pink Floyd, to be honest, is the furthest thing from my mind at the moment," he told Reuters in a telephone interview on Monday. "I know that other people have a different view and it has some sort of intrinsic importance, but right at the moment I'm just not thinking about Pink Floyd. I am just concentrating on what I'm doing in a totally selfish way, and enjoying myself."

Now 56, Gilmour said he prefers a simpler life making more spontaneous music, whereas a Pink Floyd album and tour would require "an awful lot of time and effort".

Famed for elaborate concerts that boasted flying pigs and laser shows, Pink Floyd grossed $104 million (66 million pounds) from its 1994 trek across North America. The stadium tour, which was seen by more than three million people, ranks third on the all-time earners list behind the Rolling Stones and U2. Since then ticket prices have soared, and industry observers say a new Pink Floyd tour could smash records.

But Gilmour, a father of eight who is reportedly worth more than $100 million, seems to be more interested in giving away his money. He last year donated proceeds of 3.6 million pounds (now $5.7 million) from the sale of a house to a charity and has set up a foundation to disburse more funds.

His coffers were swelled by the success of a 2-CD Pink Floyd hits compilation, "Echoes", which was released late last year. Gilmour said the album "could well be" the final chapter in the Pink Floyd story. "But we'll have to see."

Classic Pink Floyd albums such as "The Wall", "The Dark Side of the Moon" and "Wish You Were Here" also continue to sell strongly. His solo career pales by comparison, and he is happy with that.

His upcoming DVD and VHS release "David Gilmour in Concert", is a largely acoustic affair built around a concert at London's Royal Festival Hall in June 2001.

Gilmour revisits old Pink Floyd nuggets like "Shine On You Crazy Diamond", "Comfortably Numb" and "Wish You Were Here", as well as a few rarities written by Syd Barrett, the group's first leader. Barrett, a drugs casualty, left Pink Floyd in 1969 and lives in seclusion in Cambridge.

Gilmour said he has not seen him since 1975, when an unrecognisable Barrett casually dropped into the London studio as the band was recording "Wish You Were Here". Gilmour is in occasional touch with Barrett's sister, and often thinks of driving up to Barrett's place for a cup of tea and a chat.

"There was a time when his family seemed to think that that sort of thing wouldn't be a very good idea, but maybe that time has passed. I might get round to it one of these days."

Gilmour joined Pink Floyd in 1968 three years after it was formed, and has led the band since its bitter 1980s split from musical mastermind Roger Waters, who went to court in an unsuccessful bid to prevent his former colleagues from touring under the Pink Floyd name.

Gilmour said he was fascinated to learn that drummer Nick Mason has recently become friendly again with Waters. Claiming an inability to hold a grudge, Gilmour said he would be happy to make up with Waters but the feeling is not reciprocated.

"Being enemies over something as trivial as who does what within a pop group is pretty childish stuff, isn't it?"

The video contains a guest appearance by Pink Floyd keyboardist Rick Wright. Gilmour last spoke to Wright a few weeks ago, about boating. But he has not spoken in some time to Mason, who is busy with diverse business interests.

The video also contains one brand new song, "Smile", for which Gilmour wrote the music and his wife, Polly, the lyrics. A studio version is almost complete, and will make the solo album. With quite a few half-finished pieces of music, he has not got far enough in the process to think about a theme.

"I don't think it's going to rock out an awful lot," he said.