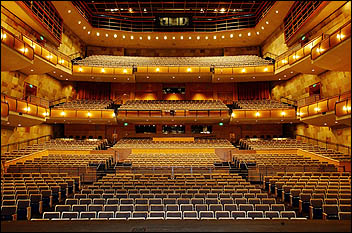 Davis, California-The Robert and Margrit Mondavi Center for the Performing Arts at the University of California, Davis opened in grand fashion on October 3, 2002, with a two-month long festival of performances by international touring artists, regional performing organizations, and music, theater, and dance ensembles from UC Davis.

The $57 million Mondavi Center will serve as a world-class venue for the UC Davis departments of Music and Theatre & Dance, a major K-12 arts education program, and one of the largest arts and lectures presenting programs in the nation. Mondavi Center is being financed through a combination of campus discretionary funds and $30 million in individual contributions, including a $10 million gift to name the building from famed Napa winemakers Robert and Margrit Mondavi.

Opening festivities began with a ribbon-cutting and gala performance on October 3, followed by a weekend of dedications, ticketed and free performances for the public, building tours, and family activities. The Mondavi Center Opening Festival will continue with performances until Thanksgiving.

a burst of music in a vacant Manhattan lot, dancers and city officials held groundbreaking ceremonies for what will be the footprint of the new Alvin Ailey American Dance Theater.

Young dancers from the school joined the adult members of the theater Wednesday in three short performances to celebrate the building of the company's new space at 55th Street and Ninth Avenue.

"See what blessings we have from one man, from Alvin Ailey, who planted the seed? Look what the tree grew into," said Artistic Director Judith Jamison, from a temporary stage assembled under a tent in the vacant lot. "We finally have a home."

The company, which has become one of the nation's most important cultural institutions, was founded in 1958 by Ailey, a Texas-born dancer who promoted black culture through modern American dance, using choreography that fused modern, jazz and classical styles.

"He would just be so proud to be here today," said Mayor Michael Bloomberg, who was a contributor to the Alvin Ailey Dance Foundation before he was elected. "Everything that he stood for is being carried on, is being built on, is being expanded."

The 77,000-square-foot, $54 million building is expected to be completed in 2004, doubling the space of the company's cramped quarters on West 61st Street.

The building's transparent design, by architects Carolyn Iu and Natan Bibliowicz, will enable passers-by to see into many of the studios and share in the dance experience.

Bloomberg dipped a shiny shovel into a pot of dirt at the ceremony, which began with a troupe of dancers that paraded the seven blocks from the company's current home near Lincoln Center.

The building will be named the Joan Weill Center for Dance, in honor of Joan and Sandy Weill, who donated $15 million to the project.

Less than 10 years ago, the ailing company faced steep debt. But recent help from charitable organizations and a change in programming have led to renewed interest in the company and sold-out shows.

The city contributed $9.5 million to the project, according to Beth Olsen, a spokeswoman for the dance company.

A typical season for the 31 dancers at the Alvin Ailey American Dance Theater includes an international tour, a U.S. tour and a five-week home season. The Ailey School offers more than 200 classes each week.

In August, Delta Air Lines backed out of a deal to pay up to $30 million for a larger $400 million expansion that was downsized for lack of financing, reports the Cincinnati Business Courier.

From Baseball to B.B. King and Barney Too

The multi-purpose Grizzlies Stadium was transformed over the weekend in a matter of hours from a gem of a baseball park into the newest outdoor concert amphitheater in California.

On Friday, September 20, the amphitheater opened to great crowds for the B.B. King Blues Festival and by Saturday morning it was hosting 8,200 pre-school children for Barney’s only west coast appearance this year.

Equal distance between Los Angeles and San Francisco, entertainers are realizing what John and Diane Carbray have known for years – the Central Valley is an underserved entertainment market. As the only multipurpose stadium in California’s San Joaquin Valley, the new Grizzlies Stadium has become a catalyst for Fresno’s downtown revitalization and a welcomed entertainment venue to the entire region of over a 1.5 million residents.

John Carbray, President and CEO of the Fresno Grizzlies, told CelebrityAccess “We began our concert season with a crowd of over 6,100 – 80 percent capacity, for the second leg of B.B. King Blues Festival’s west coast tour and we look forward to bringing many more concerts to the region over the next few months.”

After the B.B. King Blues Festival on Friday night, Grizzlies Stadium hosted over 8,000 pre-school aged children and their parents for a visit from Barney. The stadium, with accents in Grizzlies purple and its brand new mobile stage, was the perfect location for the purple dinosaur’s first of only five appearances throughout the United States this year.

Diane Carbray, Chief Operating Officer, told CelebrityAccess that “With the addition of the largest moving stage in the world designed by award winning Brown United we can accommodate acts of any size in a matter of hours.”

Supported on 126 rubber wheels, the 40 tons of wood and steel is the creative brainchild of Grizzlies owners John and Diane Carbray and concert stage designers Mike and John Brown of Brown United in Southern California. The 40-foot by 60-foot stage is “the largest mobile stage in the world,” said John Brown, CEO of Brown United. “At this size, it can pretty much handle any act out there.” The gigantic stage and towering roof was designed to be rolled onto the field at Grizzlies Stadium, converting it from a ballpark into a first-class entertainment amphitheater.

The program is centered around the Bluebird tradition, with songwriters performing in the round and trading songs, jokes and Bluebird Cafe memories.

Promised performances include "She's in Love with the Boy," and "Strawberry Wine."

Entertainment brought only four of 20 shows it had promised to host in Columbus as part of a deal that gave the city a minor-league basketball team.

Clear Channel's partnership with the National Basketball Development League helped persuade city officials to allow the Riverdragons to use their civic center.

But the 20 events, including some concerts, never happened. Clear Channel brought a World Wrestling Entertainment production, a visit by the Harlem Globetrotters and two days of monster truck shows. Clear Channel owes the city of Columbus $99,000 in penalties for the shows it did not arrange, but city officials say they wanted the events more than the cash.

"I can't say I'm happy," said Isaiah Hugley, deputy city manager. "We are going to invoice them for the money they owe us for this year."

Clear Channel, based in Houston, also failed to schedule its contracted number of shows in six other NBDL towns – Fayetteville, N.C.; Greenville, S.C.; North Charleston, S.C.; Huntsville, Ala.; Mobile, Ala.; and Roanoke, Va.

Frank Roach, a Clear Channel vice president in charge of venue relations, visited Columbus on Thursday to see "where we've failed to perform and why."

Columbus is considered a risky venue because of a history of not selling enough tickets. Top performers have canceled Columbus shows over the past three years, including Bill Cosby, Prince, Jo Dee Messina and Gregg Allman.

Instead, lower-cost family-type events like the Harlem Globetrotters and monster truck shows have been scheduled.

"It's been damaged goods for a long time. Events have canceled," said Charlie Schilling, the civic center's director. "We need music concert events. I've expressed that in the strongest possible language."

CINCINNATI (AP) — Jazz buffs in Cincinnati have a new hangout.

The Blue Wisp Jazz Club, which presents live music nightly, has moved across town. The city helped in the move, providing a $40,000 grant and a $50,000 small-business loan.

"It's been a long time getting this done, but it was worth it," said the club's owner, Marjean Wisby. "It's turned out real nice."

Wisby and her husband, Paul, opened the original Blue Wisp in 1973 in the city's O'Bryonville neighborhood and began offering live jazz in 1977. Renovation of that area forced the club to move to a basement location downtown in 1989.

The latest move occurred because another tenant of the building wanted more space.

All the touring jazz greats have played there, but the 16-piece Blue Wisp Big Band has been the mainstay. It was founded in 1980 by musicians who wanted a progressive jazz band. The band has played every Wednesday at the club for more than 20 years, building a national reputation.

"As soon as I walked in, I dug it," said John Von Ohlen, drummer and leader of the Blue Wisp Big Band. "It's my kind of joint."

Musicians like the acoustics, the city ambiance and the spacious feel. The new club seats 150 people, 20 more than the basement location.

"It sounds great," said pianist Phil DeGreg, whose trio performs Tuesdays and Thursdays. "It has the feeling more like a concert. Not in the formal sense, but the music itself has a little bit better presence to the audience."