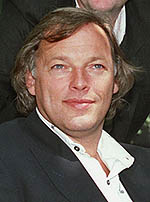 One of the reasons why Pink Floyd will not tour is because guitarist David Gilmour does not want to. Now comes a story from London's Sunday Telegraph that he is donating the proceeds
from the sale of his London house to charity. He sold the home
to Earl Spencer, brother of the late Princess Diana, for
$6.48 million and gave the money to Crisis, which helps
homeless people.

"I don't need the money, and I just thought
it would be a good thing to do," he says. "I've had that house for nearly 20 years. It's
made a fat profit, and I've scarcely used it for the last
six or seven years." Gilmour, 54, lives in a farmhouse in
West Sussex, England, and owns a house in Greece. He’s a
regular donor to Crisis through his foundation, the DG
Charitable Trust.