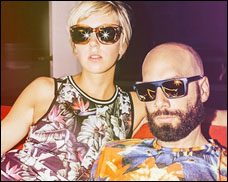 LOS ANGELES (VIP-NEWS) — Jack Conte, one half of the indie duo Pomplamoose, took to the nascent publishing platform Medium yesterday to lay out the difficult financials involved in mounting a 23-city U.S. tour.

The result is a stark illustration of the uphill road artists must walk on their way towards success, even for a band as well-known as this one.

Conte makes clear in his piece that his band is not a fling but a career, one that allows him and his partner and band co-founder Nataly Dawn to draw a $2,500 per month salary, from revenue through iTunes sales ($5,000 per month) and Patreon donations ($6,326 per video). Conte makes no mention of streaming services or YouTube earnings. The rest of the pair`s income is directed back into their band.

Before even putting the key in their tour van`s ignition, Conte and Dawn put $24,000 of expenses across two credit cards for vehicle and equipment rentals, hotel bookings and the like.

For all that work, Pomplamoose ended up losing $11,819 on their not-even-month-long tour. For every Phish and Ed Sheeran, there`s are many more bands like Pomplamoose — people who may never reach a mainstream audience, but are fully committed to making the most of their ambitions.

"The loss was an investment in future tours," Conte writes. "We are the mom and pop corner store version of `the dream.` If Lady Gaga is McDonald’s, we’re Betty’s Diner. And we’re open 24/7."