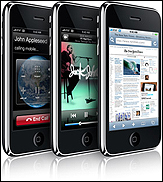 LOS ANGELES (CelebrityAccess MediaWire) — The Apple publicity machine went into full gear this week as the company sent out invitations to the tech press for a media event scheduled for next Tuesday called "Let's Rock." The invitation, sent via email, featured an image of the silhouette of a man jumping in air while he listens to an iPod. The image was captioned enigmatically "Playing soon."

The invitations lit the fires of speculation and while rumors about a change to a monthly fee for the iTunes music store, most analysts believe that the company on Tuesday will reveal less drastic changes such as lower prices for their iPod Touch and some updates to the design of the now venerable iPod Shuffle and Nano.

There may be some truth to this supposition – the iPod Touch is currently $299, a full $100 more than the fully-featured iPhone 3G. Other things may include additional storage or additional aesthetic design features.

Not everyone's convinced of this however and some are looking for bigger changes in other avenues beyond hardware refurbs.

"From what we've heard from the folks at Apple, this is going to be a pretty big announcement." Ben Bajarin, an analyst with Creative Strategies told InternetNews.com

"The App Store is so central to Apple's strategy that it has to keep attracting more developers," said Bajarin. "With the iPhone 3G launch, the excitement from the hardware to software might have been the fastest transition we've ever seen. Apple needs to take advantage of that and get that software on more platforms."

Others have noted that the iTunes software itself may get a refurb – the current iteration of the music software is version 7, which debuted in March of 2007, a long time in the fast paced world of the Internet.

Another possibility may be interactive albums. The band Snow Patrol is set to release their latest album which according to a Polydor production manager will feature a downloadable "interactive" application that will offer additional content such as artwork, lyrics, behind-the-scenes photos for iPhone/iPod touch owners.

Whatever it turns out to be, we'll have the rest of the week to ponder – stay tuned for next Tuesday for more on this story. – CelebrityAccess Staff Writers