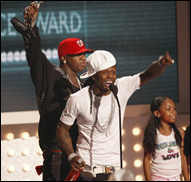 LOS ANGELES (CelebrityAccess MediaWire) — Hip-Hop mogul and Cash Money Records founder Birdman is reportedly being sued by a concert promoter who's alleging that Birdman set up a concert by Lil Wayne in New Orleans, but failed to deliver the performer.

According to a court filing obtained TMZ.com, Illuminaty, Inc. claimed to have invested $275,000 to produce a November 23rd 2007 concert that would feature both Birdman and Lil Wayne, through a business partner of the rapper. The date however, was reportedly cancelled due to logistical issues and wearther. The event was rescheduled for the following January in Miami, but again went by the boards due to claimed logisitcal issues.

After the second cancellation, the promoter, Illuminaty, filled a lawsuit, citing breach of contract for failing to deliver on the show. The plaintiff also claims that he's suffered shame, mortification, humiliation, worry, anxiety, stress, and emotional distress and are seeking damages in excess of $275,000, attorney fees, and punitive damages. – CelebrityAccess Staff Writers