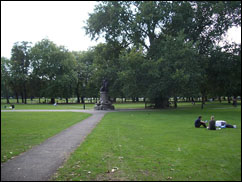 LONDON (CelebrityAccess MediaWire) — Sainsbury, a major UK supermarket chain has sparked controversy over its plan to team up with Live Nation to host a major outdoor concert on Clapham Common on September 10.

J Sainsbury is staging the event to support the Paralympics (similar to the Special Olympics in the U.S.). The event is set to run from 11am to 10pm with numerous pop acts as well as paralympic sports such as wheelchair rugby and basketball with a sought-after audience of as much as 52,000.

According to the Telegraph, the event has received a conditional license for the event but is still pending final approval by Lambeth's city council, over the vocal protest of some residents who are concerned about potential environmental damage to Clapham Common and that the festival might be a divergence of the common as a public space to one that caters to commercial uses.

"In granting a licence at its meeting last night for yet another large scale event on Clapham Common, Lambeth’s Licensing Sub-Committee completely ignored the concerns of local residents about the impact of 52,000 people on a site measuring 70,000 square meters for an event lasting from 11am until 10pm later this year," said Lambeth Councillor Shirley Cosgrave.

"An event of this size has not been held on the common since 1998, when a huge amount of damage was done to the common, which took a very long time to recover," Cosgrave added.

Other residents have expressed concern that the "gargantuan" event would set a "substantial precedent" for future events in the park.

Clapham Common, located amidst an upscale south-London neighborhood, is a 220 acre park that is managed by the Borough of Lambeth. Other events held at the park include football, two music festivals; the Colourscape Music Festival and the Get Loaded In The Park festival as well as Lesbian & Gay Pride festivals. – CelebrityAccess Staff Writers