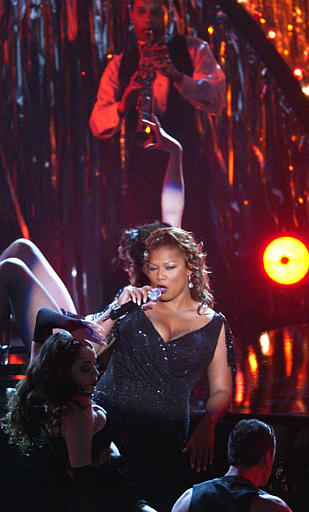 (CelebrityAccess News Service) – Scott Sanders, president/CEO of New York-based studio Creative Battery, and Randy Phillips, president/CEO of AEG/LIVE, in association with Jack Rovner and Ken Levitan of Vector Recordings, have teamed up Queen Latifah in a unique, integrated multimedia music joint venture. As part the deal, Queen Latifah will collaborate with Grammy Award-winning producer Arif Mardin on a new album, which Creative Battery along with Vector will record, market and oversee distribution. In addition, Sanders noted that as part of the unique venture, the team will produce a 20-city concert tour and a television special/home video/DVD of the concert. The album, scheduled for release in summer 2004, will be a collection of timeless songs chosen and covered by Queen Latifah.

"I was looking through my record collection one day when I realized how many songs have impacted my life," said Queen Latifah. "For this album, I will choose songs that have shaped me artistically and affected me emotionally. Now all I have to do is narrow down my list of 700 songs. Collaborating with Arif Mardin, Creative Battery and Vector Recordings will allow me to make my dream album and support its release in new, exciting ways."

"We have found a unique and exciting partnership in Creative Battery, AEG and Vector Recordings," said Queen Latifah's manager Sha Kim Compere. "They have varied and extensive expertise in all aspects of artist development. I believe that this partnership is revolutionary in the field and represents the future of entertainment, where artists can look to one comprehensive organization for all of their needs."

"After the world witnessed Latifah's amazing vocal performance in Chicago, we knew we had to make this record. It is the perfect time for both her long-standing and new fans to hear everything she can do," said Sanders.

"AEG/LIVE has been looking for opportunities to partner with the creative community in novel new business models as the music and live entertainment industries re-invent themselves in this brave new world," said Phillips. "How lucky for this company to get the chance to be an active partner in such a multi-faceted project centered around the amazing musical talents of a triple-threat superstar like the Queen and the visionary executive talents of her manager, our partners at Creative Battery, and our joint venture with Vector."

Rovner, co-principal of Vector Recordings, said, "To be able to bring together the multi-talented Queen Latifah and the legendary Arif Mardin is a tremendously exciting opportunity for us at Vector and Creative Battery. We are honored to be involved in the project." –Bob Grossweiner and Jane Cohen