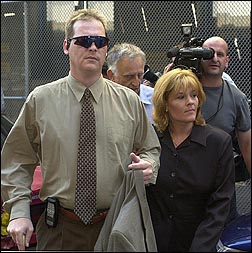 NEW YORK (AP) — Opie and Anthony are over and out.

The New York-based shock jocks, criticized by Catholic groups for broadcasting a live account of a couple allegedly having sex in St. Patrick's Cathedral, had their nationally syndicated show canceled Thursday.

"Based on recent events, the Opie and Anthony Show has been canceled, and will be replaced by other programming beginning Friday," WNEW-FM said in a statement.

The station, owned by Infinity Broadcasting, offered no further comment. The pair had been pulled off the airwaves Monday, three days after the stunt was aired.

The cancellation was announced shortly after Federal Communications Commission Chairman Michael Powell directed the agency's enforcement bureau to investigate the broadcast. The FCC had been flooded with hundreds of complaints about the show.

The decision to sack the shock jocks and their highly rated afternoon drive-time show was hailed by William Donohue, head of the 350,000-member Catholic League.

Donohue said his group would back off its call for the FCC to pull WNEW's broadcast license and fine Infinity.

The cancellation came one day after the Virginia couple suspected of the sex stunt appeared in a Manhattan courtroom on charges of public lewdness.

Brian Florence, 37, of Quantico, Va., and Loretta Lynn Harper, 35, of Alexandria, Va., were due back in court Oct. 2. The couple's lawyer has said they were just simulating sex inside the landmark Manhattan cathedral.

The couple was arrested Aug. 15 after they allegedly had sex in a cathedral vestibule just a few feet from worshippers, police said.

The radio show's stunt was part of a regular feature where couples could earn points and win a trip for having sex in risky places.

Charges of acting in concert were still pending against Opie and Anthony producer Paul Mercurio, 42, who provided a running account of the encounter via cell phone.

It was the second firing in four years for Greg "Opie" Hughes and Anthony Cumia. The pair was canned in 1998 by a Massachusetts station after announcing on April Fool's Day that Boston Mayor Thomas M. Menino was killed in a car crash.