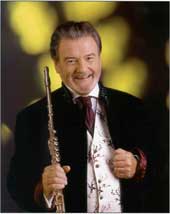 (CelebrityAccess News Service) – In recognition of his professional achievements, the Recording Academy will pay tribute to flutist Sir James Galway at its Salute to Classical Music luncheon on February 5, at the Millennium Biltmore Hotel in Los Angeles. Guests will include prominent members of the classical music community. Academy President Neil Portnow will present the seven-time Grammy nominee with the President's Merit Award. Ginny Mancini, Henry Mancini's wife and president of the Henry Mancini Institute, is the Honorary Chair for this event.

"Sir James brings the joy of music to so many people around the world, and remains dedicated to sharing his passion with the next generation of young musicians," said Portnow. "His work is truly inspired. We are so pleased to be honoring a musician of Sir James' caliber and character."

Galway is the London Mozart Player's Principal Guest Conductor. He plays and conducts with the orchestra on a regular basis. In addition to his touring schedule, Galway holds master classes annually, and donates much of his free time as President of the volunteer-based, non-profit organization Flutewise. Flutewise assists young people to further their music education by donating instruments to low-income students, setting aside flutes for use by young people with disabilities, and holding events throughout the UK to raise money for various charities.

Among his many accolades, Galway was named Musician Of The Year by Musical America, has received the Record Of The Year award from Billboard magazine, and the Grand Prix du Disque for his recordings of the Mozart Concerti. He was the only classical performer at the 1998 Nobel Peace Concert in Oslo, Norway, sharing the stage with Elton John, Phil Collins and Shania Twain. Her Majesty Queen Elizabeth II of England has honored him twice, with an Order of the British Empire (for his services to music) and with a knighthood.