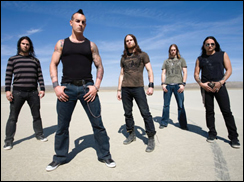 LAS VEGAS (CelebrityAccess MediaWire) — Hard rock band Rev Theory have been forced to scrap plans for a fall tour after a freak accident at a wedding left guitarist Julien Jorgensen with a severed tendon in his left hand.

While a a post-wedding reception, one of the guests attempted to open a beer bottle without an opener, but ended up shattering the bottle on a table's edge. The glass sliced Jorgensen's left hand on the follow through, leaving a cut that required surgery.

While Jorgensen is currently unable to perform, a full recovery is expected. "I am super bummed that happened, and it is a freak accident. It is a helpless feeling. I feel bad about dropping off the tour and disappointing the fans. As soon as I am able, we will be back on the road," Jorgensen said

Singer Rich Luzzi added, "After being a band for 10 years, Rev does not feel comfortable taking the stage without our brother as it would not be a true representation of the band."

Future plans for touring will be announced once available. Rev Theory’s current single "The Fire" is at #37 on the Active Rock radio chart. It follows the top fifteen hit and title track from their recent release Justice. The album had a strong first week at retail, with Billboard chart debuts of 11 at Alternative, 20 at Hard Rock and 75 on the Top 200 National chart. – CelebrityAccess Staff Writers