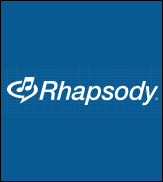 Rhapsody America opens an all mp3 store today backed by a $50 million marketing campaign aimed straight at iTunes. Rhapsody's reach is extended as the download provider for Yahoo, MTV and iLike whose music application is popular on Facebook. The DRM free tracks are also available over the air via Verizon Wireless.

Rhapsody is the leader in subscription music, but decided it also had to compete with iTunes head on to succeed. "We're no longer competing with the iPod. We're embracing it," said VP Neil Smith. Consumers can listen to full songs before buying vs. 30 second samples on most stores. Tracks are $.99 with albums at $9.99. This matches iTunes and Napster, but is higher than Amazon.

ANALYSIS: With $50 million in marketing and partners like MTV and Verizon, Rhapsody may be able…to put a dent in iTunes where about 50% of the catalog still carries DRM. Full song streams are also a welcome addition. Rhapsody also traditionally offers more music discovery options and content than its rivals.

But the competition still has the advantage. The seamless relationship between iTunes and the iPod is hard to beat. Plus millions have already given their credit cards to iTunes and Amazon and set their computers to be compatible with them. Rhapsody may not yet offer strong enough reasons to switch.