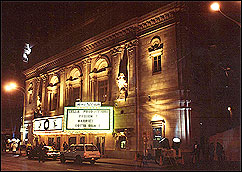 Brothers Mike and Steve Roberts purchased the theater in 2003 for $1.5 million. The brothers name is already attached to various hotels, apartment complexes and facilities in the city.

The venue is trying to rid itself of a reputation as a hard rock facility, and focus on a more adult-themed schedule.

Joe Litvag of AEG’s Concerts West division, which books shows at the newly-reopened venue, told the St. Louis Post-Dispatch, “We won’t be doing hard-rock shows. Those are the type of shows that work really well at the Pageant, and that where they should play…I made a promise to Mike and Steve that I will not trash the place by booking too aggressive of a show.”

In the last few years of the American Theatre’s existence, management booked acts such as Pantera, Incubus, White Zombie, Suicidal Tendencies, Insane Clown Posse and Megadeth. The Roberts brothers are trying to keep the list of acts more adult-themed to cater to a more mature audience.

The Roberts spent more than $2.5 million on renovations to the worn down theater, and expect totals to reach nearly $5 million by the time they are finished.

The theater has retained the basic feel of the American, with the venues ornate beauty remaining. A new electronic reader marquee, fresh paint and carpeting and remodeled and expanded bathrooms greet patrons of the theater. Retractable seats, assembled on risers on the floor’s three levels, can be removed for corporate and private events, meetings and reception that don’t required concert seating.