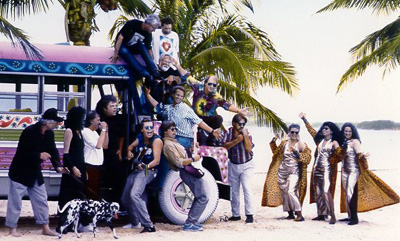 Best selling authors, including Scott Turow, Amy Tan and Dave Barry, plus "Simpsons" creator Matt Groening — AKA the Rock Bottom Remainders — kick off their first West Coast "Fire In The Belly" tour in Seattle, April 23, followed by San Francisco and Los Angeles. The tour is aimed to raise funds for the America Scores after-school programs in the three cities.

Bruce Springsteen says of these authors-turned-rockers: "The band is not too bad. It's not too good either! But if it gets any better it'll ruin the whole thing."

Money raised at the concerts is for America Scores, a national after school creative writing program for inner city kids. The tour provides for the programs in the three newest cities.

Lead guitarist, author/humorist Barry says: "For this first West Coast tour, we considered learning how to tune our instruments but we're afraid that will destroy our unique sound! We've been called more frightening than a Stephen King novel but it's a chance to goof off for a good cause every year."

McGuinn observes: "Working with the Remainders has added a new meaning to performing."