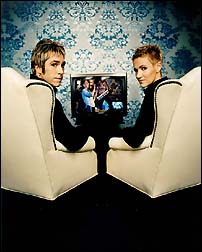 SWEDEN: Starting in Stuttgart-Germany on September 25th and closing in Gothenburg on November 17th, the Swedish pop/rock duo Roxette will get back on stage.

For the first time in six years Roxette is going on a European tour with 25 dates set from Germany, Belgium, Spain, Switzerland, Russia and Estonia.

Roxette will be touring in support of "Room Service" (EMI Sweden) released last month in Europe. The album was recorded at Polar Studio in Stockholm and mastered at Abbey Road Studios in London, it's the follow-up to "Have a Nice Day" from 1999.