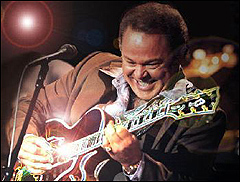 Clark has also signed on with Webster & Associates Public Relations & Marketing for publicity representation in association with The Brokaw Company.

Clark is perhaps best known for hosting the long-running syndicated variety show "Hee Haw", but is also a well-regarded stage performer who plays not only the guitar, but the banjo and fiddle. Clark was the first American country performer to headline a tour in the U.S.S.R. and the first country artist to guest host on the "Tonight Show".

"He has headlined every major venue in the USA many times, as well as making multiple appearances at major festivals overseas," says WME’s Paul Moore. "A long time member of the Grand Ole Opry, last year, Roy was inducted into the Country Music Hall of Fame in Nashville. He is a true living legend, and we’re delighted to have him back in our fold as a treasured client." – CelebrityAccess Staff Writers