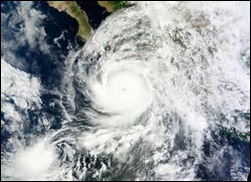 The concert was scheduled for the week of October 7th in Cabo San Lucas on the tip of the Baha Peninsula, just a few miles from where the Category 3 hurricane made landfall.

“This year marks our 24th anniversary so nothing short of a massive hurricane could have kept me from Cabo,” Hagar said. “But after seeing the damage that Odile’s caused to Los Cabos’ airport, resorts and town, it’s with an incredibly heavy heart that we’ve come to that decision. Our prayers and best wishes are with our Cabo Wabo family and everyone that’s been affected by this storm. Los Cabos will recover better and stronger than before because of its incredibly strong community," Hagar said in a post on his website.

Hagar told USA Today that his cantina, Cabo Wabo, had largely weathered the storm intact, suffering some water damage, but that damage to the area in general had been severe. Nearly a week after the storm and electricity and water services have not been restored and more than 18,000 tourists have been evacuated from the region by the Mexican Air Force.

"We will be back up and running, eventually," says Hagar. "But things look tough right now." – Staff Writers