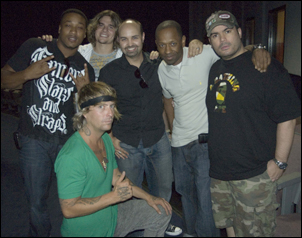 LOS ANGELES (CelebrityAccess MediaWire) — The ole Pop/Urban Songcamp is a weeklong songwriting summit that featured some of the most successful Canadian, U.S. and U.K. songwriters. This year in a single week over 40 new songs were generated for album, film and TV project consideration.

During the last week of September over 34 top pop and urban songwriters from Canada, the U.S. and the U.K. converged on the LA Musicians Institute for a week long invitation-only event of intense writing sessions.

“This is what’s really going to start building a bridge between the urban songwriting communities in Canada and the U.S.,” says Hyland, who took the opportunity to thank Songcamp co-presenters, Notting Hill Music and Musicians Institute, as well as sponsors the Department of Canadian Heritage and performing rights organizations ASCAP, SESAC, BMI, and SOCAN, for their generous support.

“Songcamp is an opportunity for all our songwriters to get out of their comfort zones, try new fresh ideas, while at the same time network with like minded creative people they have never met before.”

Writers that participated in this year’s Songcamp include contributors to past No. 1 albums by Usher, Jamie Foxx, Christina Aguilera, Danity Kane, Jahiem, Destiny’s Child and Mary J. Blige among others.

During the Songcamp virtual strangers were paired up and placed in 12-hour studio sessions with the mandate to compose, complete and demo a brand new song, assisted by Musicians Institute personnel.

“We exclusively used Musicians Institute’s engineers and some of their recent graduates and found them extremely professional and accommodating,” says ole’s Hyland.

“The facility was outstanding and we look forward to working with Musicians Institute in the future.”

During the sessions, leading A&R representatives from Epic Records, Atlantic Records, Capitol Records, Warner Music, Universal, and Columbia were on hand to offer direction to the writers.

As a result, a number of the 40 new songs created at the ole Pop/Urban Songcamp were placed on immediate hold for pending album, film and TV projects.