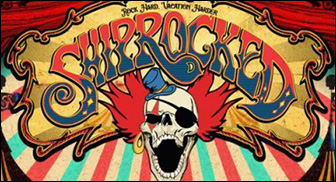 (CelebrityAccess) — After selling out in record time, ShipRocked 2017 set sail from Miami on January 16 on board Carnival Victory for four days and nights of a three-ringed floating rock ‘n’ roll circus on the high seas, led by headliners Breaking Benjamin, along with Papa Roach, Alter Bridge, Sevendust, Pop Evil and more. 3,000 ShipRockers shared in “The Greatest Vacation On Earth,” enjoying a packed itinerary of more than 40 performances from 20+ bands – including a pair of unforgettable deck stage sets from ShipRocked’s own all star band The Stowaways — a day on the beach on beautiful Grand Turk in Turks & Caicos, sideshows, theme nights, and more.

ShipRocked veterans Sevendust welcomed old friends and new family alike to the floating festivities with their bracing kickoff performance on Carnival Victory’s main deck. Headliners Breaking Benjamin brought ShipRocked’s eighth edition to a memorable conclusion with a raucous deck stage set on the cruise’s final night – before frontman Benjamin Burnley joined many other ShipRocked artists posing for photos and mingling with fans well into the night.

ShipRocked 2017 ringmasters Kayla Riley (SiriusXM’s Octane), Ralph Sutton (The Tour Bus Radio / The S.D.R. Show) and Big Jay Oakerson (The S.D.R. Show) kept the proceedings moving through a packed schedule of hosted activities both on land and at sea.

Here’s what our own Laura Rode, CelebrityAccess photojournalist and Director of Business Development had to say about her experience onboard ShipRocked 2017:

“What better way to vacation then aboard the well-run “Carnival Victory” with dozens of talented musicians and 3,000 of their closes fans.

Whether you were a “Newbie” or a “Survivor” of past ShipRocked’s; the wall to wall performances, parties, games, events, Grand Turks and bad decision opportunities – ShipRocked 2017 brought the complete package for rock diehards young and old.

The Ask4 Entertainment team ran a tight ship, keeping the party afloat while working endlessly to make it look seamless. They truly have the formula after 8 years, to bring unique rock experiences to life.”

See the wide array of photos captured by CelebrityAccess’s Laura L. Rode, go to this link:

Produced by ASK4 Entertainment, ShipRocked is a once-in-a-lifetime experience with unique performances and musical collaborations that provides guests with the opportunity to vacation with their favorite bands, meet new friends, and reunite with old ones year after year. ShipRocked onboard and beach activities include photo meet and greets with band members, poolside games, artist Q&A sessions, trivia challenges, game shows, parties, contests and more. The ShipRocked Cancer Sucks! onboard charity auction has raised over $500,000 to date for innovative medical research and finding a cure for cancer.

Look for the ShipRocked 2017 aftermovie and details about ShipRocked 2018 to be announced soon and visit www.ShipRocked.com for more information.