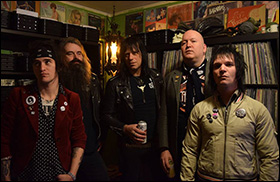 PORTLAND, Ore. (CelebrityAccess) — Jon Paul Steuer, who served as the vocalist for the Portland-based punk band P.R.O.B.L.E.M.S., died on January 1st. He was 33.

Steuer’s bandmates broke the news about the singer’s death via social media, writing on Facebook:

“It is with heavy hearts and saddened minds that we announce the passing of our dear friend and singer Jonny Jewels, AKA Jon Paul Steuer. The addition of Jonny to our dysfunctional band family was one of the best choices that we have ever made, and he brought a much needed sense of fun and lightheartedness to everything we did.

“He was only with us for a little more than a year, but we managed to cram a lifetime of great experiences into his tenure as our singer: dozens shows at home in Portland and across several states, an amazing European tour, and our best full-length release yet.

“We’ve lost our singer, but far, far more than that we’ve lost a friend. Rest in peace, Jonny…we love you.”

A cause of death for Mr. Steuer was not disclosed.

In addition to his work as a musician, Steuer gained noteriety as a child star, starting his professional acting career with an appearance as a young Klingon in a 1990 episode of “Star Trek: The Next Generation.” Other roles included the potrayal of Quentin Kelly on the ABC TV series Grace Under Fire from 1993 to 1996.

More recently, Steuer had also launched a vegan restaurant called Harvest at the Bindery in Portland, Oregon in 2015. On Thursday, following news of his passing, the restaurant announced that it was closing its doors due to an “unexpected tragedy.”