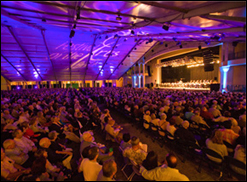 BOCA RATON (CelebrityAccess MediaWire) — A rowdy August 30th concert by punk-reggae outfit Slightly Stoopid tied up city emergency services and cost more than $25,000 in expenses after a crowd of more than 8,000 people descended on Mizner Park, the Sun-Sentinel reported. Many in the crowd didn't even have tickets to the event and more than 30 police officers spent several hours breaking up fights while rescue workers took 6 people to the hospital for alcohol poisoning and other reasons.

Since then, the City has sent a letter to the Centre for the Arts at Mizner Park, claiming that the event had violated the terms of the lease they have with the city, but as of yet, are not seeking restitution. Instead, the city has indicated that they expect advanced notice of bands that have a history of an "unruly crowd" and will expect stronger planning for parking and overflow crowds.

The issue seems to stem partly from the heavy promotional effort the concert got on local radio stations, who encouraged people to come to the park. "It was promoted as a tailgate party," he said. "That's something we'd like to avoid if we can. This shouldn't be a place where there's underage drinking." City Manager George Brown told the Sun-Sentinel.

Since the August Slightly Stoopid concert, an October 3rd show by alt-rockers O.A.R. has been moved out of Minzer Park due to concerns over a similar unruly crowds. – CelebrityAccess Staff Writers