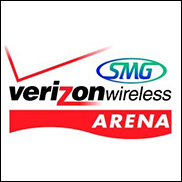 MANCHESTER, NH (CelebrityAccess) – SMG signed a multi-year partnership agreement with Southern New Hampshire University for the naming rights to the current Verizon Wireless Arena, which will be known as “SNHU Arena” beginning in September 2016. The partnership will include internships for SNHU students, information booth for perspective students and use of the facility for SNHU athletics events and graduation ceremonies. The SNHU Arena will continue to host the Manchester Monarchs, concerts, other sporting events, family shows and community events.


“SMG is excited about this new partnership with Southern New Hampshire University as we celebrate our 15th anniversary in Manchester this fall,” said Tim Bechert, Senior General Manager, Verizon Wireless Arena. “This partnership will open many new doors, enhancing our community, our arena and enriching the lives of SNHU students beyond the traditional classroom. Together we will create a program of success for continued learning within the sports and entertainment industry.”


SNHU is a nonprofit university committed to expanding access to higher education across the country.
Investing in the Manchester community, SNHU’s home since 1932, remains a top-priority for the university. The university now leases approximately 250,000 square feet of space in two downtown locations and has added more than 2,000 new jobs to the local economy, a boon to downtown merchants. The partnership with the arena and SMG will allow SNHU to connect with the community in a whole new way; highlighting the importance of education, proving employment opportunities and contributing to the local economy.


“Partnering with SMG and the arena will provide unique, hands-on experiences for our students and an opportunity to give back to the Manchester region,” said Paul LeBlanc, President, Southern New Hampshire University. “This partnership is about more than a name on a building. It’s about enriching the student experience, better supporting our athletic programs, driving economic change in Manchester, and showing our neighbors that higher education is within their reach.”