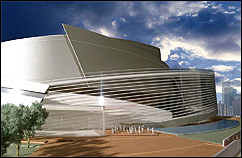 (CelebrityAccess MediaWire) — SMG has signed the pre-opening services and venue management contract for the 18,000-seat BOK Center in Tulsa, Oklahoma, scheduled to open in 2008, as well as a management contract with the Tulsa Convention Center, which is set to undergo a $40 million renovation and expansion beginning next year.

Both projects are part of “Vision 2025: Foresight 4 Greater Tulsa,” a program designed to increase economic and community infrastructure, with emphasis on future generations of Tulsa.

“The Vision 2025 Oversight Committee worked tirelessly, and I fully support their recommendation,” Tulsa Mayor Bill LaFortune said in a statement. “After extensive review and countless hours in the research and interview process the committee determined that SMG was best suited for the job.”

“SMG is thrilled to be involved with Tulsa’s premiere entertainment facilities. By choosing SMG for the pre-opening services of the BOK Center and our assistance with renovation and expansion of the Convention Center, the City has recognized our extensive experience and expertise in those areas and we are happy to provide such services for their prized facilities,” said Brian Kabatznick, Vice President of Business Development for SMG. “SMG has provided consulting services on this project since 2004 and it is very rewarding to see out efforts come to fruition.”

Construction of the $141 million BOK Center began in August of 2005 and it is projected to open in the spring of 2008. It will host such events as NCAA basketball tournaments and championships, as well as concerts, ice shows, rodeos, family events, religious events, and much more.

Mayor LaFortune added, “SMG is arguably the best in the business, and due to its huge size and relationships, it will have great leverage in events bookings, creating a competitive advantage for Tulsa. Also, our current Arena tenants and our naming rights sponsor, BOK, endorsed SMG, along with numerous other clients and vendors.” –by CelebrityAccess Staff Writers