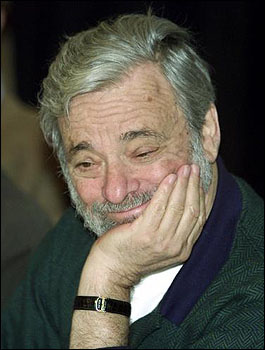 Stephen Sondheim is proving to be a box-office bonanza for the Kennedy Center in Washington.

Its record for single-day ticket-sales was shattered Monday when seats went on sale for the four-month celebration of Broadway's pre-eminent composer-lyricist that begins at the arts complex in May.

"One of the reasons we are doing this festival is to dispel certain myths," Michael Kaiser, the center's president, said Tuesday. "And one myth is that Sondheim works are not accessible and are not popular."

Between what was sold Monday and Tuesday and what already has been purchased by groups and subscribers, the festival already is over 50 percent sold out, Kaiser said. He expected all the tickets for the festival, which ends in August, to be gone in six to eight weeks.

More than 25 percent of the ticket sales were from outside the Washington metropolitan area, with 13 percent from New York, according to Kaiser. Orders were received from 41 states and such foreign countries as Australia, Japan, Portugal, Sweden and Great Britain.

The Sondheim celebration, which includes full productions of six Sondheim musicals, starts May 10 with "Sweeney Todd," starring Brian Stokes Mitchell and Christine Baranski. Also being performed in the festival, which concludes Aug. 25, are "Company," "Sunday in the Park With George," "Merrily We Roll Along," "Passion" and "A Little Night Music."

So far, "Sweeney Todd" has been the best seller, with "Company" and "A Little Night Music" close behind, according to Kaiser.

Lines at the box office Monday were long, often stretching into the foyer of the center. And at one point, the Kennedy Center web site, www.kennedy-center.org, was receiving 55 requests per second for information on the festival.