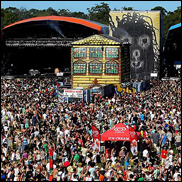 MELBOURNE, Australia (VIP NEWS) — In a blockbuster deal which will reshape Australia's festivals landscape, the organizers behind Soundwave Festival are buying into the Big Day Out, according to Billboard.


The company behind Soundwave, the country's biggest rock and metal fest, is understood to have acquired Ken West's stake in BDO, the event he jointly launched in 1992.


Its understood West had a 49% stake in BDO, having sold a chunk of the business to Austin, Texas-based C3 Presents, promoter of Lollapalooza and Austin City Limits Music Festival. West struck the partnership with C3 after his business partner Viv Lees abruptly left ahead of the BDO's 20th edition in 2012.


The Big Day Out is the biggest travelling circus of its kind anywhere in the world. At its peak, the tour extended to seven dates across Australia and New Zealand, and in 2009 shifted a total of 330,000 tickets, according to organizers. There was no great celebration for the 20th anniversary show last year when ticket sales took a massive slide. By all accounts, the 2013 run was back on track.


Soundwave is run by AJ Maddah, the maverick concert promoter who built his touring fest from a single date in Perth back in 2004, and evolved into a multi-date tour which sells upwards of 200,000.


News of Soundwave's big deal came as Maddah's other main festival asset, Harvest, was said to be close to sinking in just its third year. On Monday night, Harvest was officially cancelled.