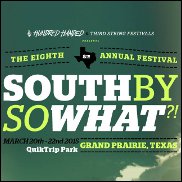 DALLAS, TX (CelebrityAccess) — Organizers for the South By So What?! Music Festival announced that the event will be returning for the 8th time on March 20th, 21st, & 22nd at QuikTrip Ballpark, right by downtown Dallas.

"2014 blew my mind and the line up we have for 2015 is no exception," said Mike Ziemer, President of Third String Festivals and Founder of South By So What?! "We have been hard at work to diversify our festival while still staying true to the scene that we have been in for the last 11 years as promoters. Having bands like Circa Survive, La Dispute, Balance & Composure, Title Fight, Hatebreed, Power Trip, and others in the mix this year is positioning us to expand outside of just the Warped Tour / Bamboozle type world we have found ourselves in but also crossing into the Fun Fun Fun Fest / Riot Fest world and that's really our goal."

Ziemer also revealed that they eyeing possible expansion plans for the festival.

"Moving forward into 2016 and beyond, we've been working on some very strategic partnerships to expand our festival to more markets than just Texas and will be changing our name to So What?! Music Festival to be more nationally and internationally relevant as we expand and take on new markets." – Staff Writers