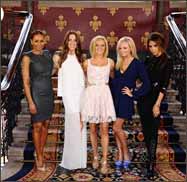 LONDON (VIP NEWS) — The Spice Girls musical Viva Forever! has failed to sell out, with tickets still on sale for most performances.


After launching with great fanfare a month ago, more than 200 seats remain unsold on certain nights.


But publicists for the show have rejected press claims that the production faces closure.


"Ticket sales are booming," they told the BBC. "Despite some savage reviews this show has its audience on their feet at the end of every performance."


The Daily Star reported this week that the show "may be axed if ticket sales don't pick up", saying performances were often three-quarters full. The claims have subsequently been picked up by other newspapers and websites.


However, weekend performances for the musical, which took more than £4m in advance sales, are either sold out or nearly full – with just a handful of tickets left over in most cases.


The picture is less rosy at the beginning of the week. There are still 226 tickets on sale for Wednesday 9 January, while there are 208 remaining for Monday 4 February. That means 16% of the seats at London's Piccadilly Theatre will be empty.


Alistair Smith, of theatre trade publication The Stage, says such a shortfall is not uncommon for the time of year.


West End venues tend to operate at about 70% capacity in January, he told the BBC, "so it doesn't sound like Viva Forever! is doing terribly".


"That said, its producers would probably have hoped to have been performing a bit better this early on in its run, something which hasn't been helped by mainly negative reviews."


Mr. Smith said he would be "very surprised" if reports about the show's closure turned out to be true.


"Other shows have withstood bad opening reviews to go on and have successful runs," he said, referring to other jukebox musicals such as Mamma Mia! and We Will Rock You, which are based on the music of Abba and Queen respectively.


"Unless ticket sales get a lot worse I'm sure they'll look to plough on and will be hoping that sales pick up in peak periods like the forthcoming half term in February."


The Spice show, which features hit singles such as Wannabe, 2 Become 1 and Spice Up Your Life, is currently booking until 1 June, 2013. –according to BBC